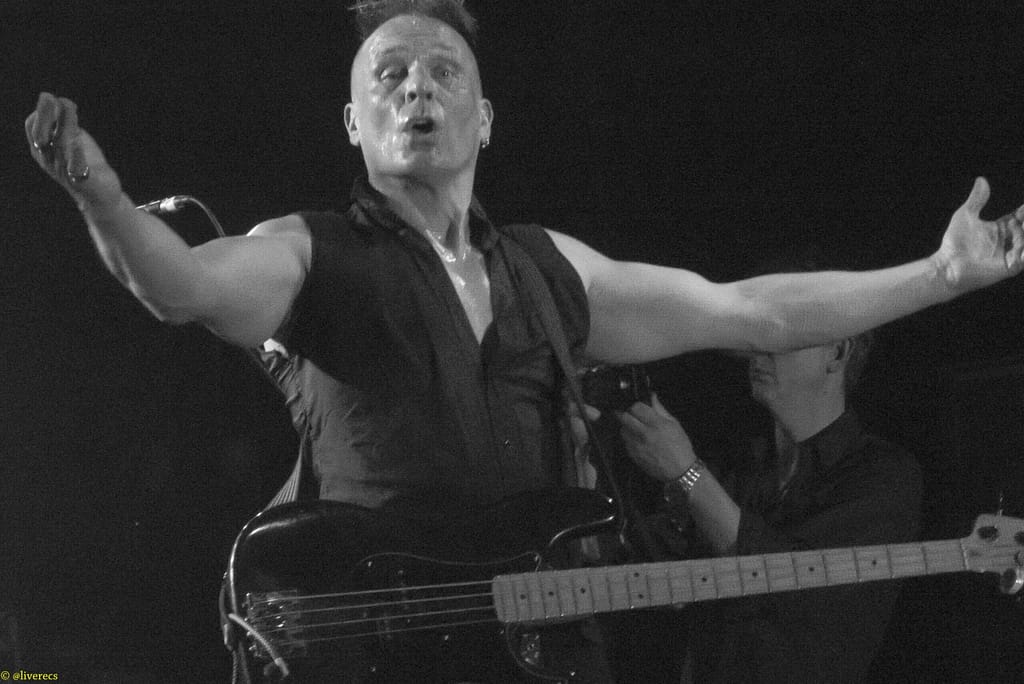 It’s not often you get a bill as strong as this for less than it costs for a round of drinks in the venue. Bringing together an audience of all ages from all over the country, The Membranes – John Robb’s other, more vintage, band – head a day of monstrous riffs, furious vocals, and multi-gender acts.

Opening the proceedings were Manchester-based rockers The Empty Page. Formed by Keli and Giz out of the ashes of cult punksters Obsessive Compulsive (with the addition of ‘shouldn’t have so much energy’ drummer Jim, formally of Boddickers), they are much more accessible musically but still pack a massive punch when it comes to power among the tunes. Dealing with a technical issue mid-song proves that even minus the guitar, the trio sounds immense. Despite a cruelly short set, they make some new fans and will certainly be on several the radars of many more people soon.

After a swift turnaround (the crew definitely have to be applauded at this show as they managed to keep everything more or less on schedule despite only having around ten minutes between each band), it’s the turn of The Blinders, another trio who are busy building a name for themselves. They also suffer a mishap when frontman/guitarist Charlie manages to snap a string during the opening number. Attempting to change guitars doesn’t help, and the rest of the set is played on five strings, not that it spoilt the enthusiasm or entertainment they provided. With a confident swagger and bravado, they too will be going places.

Next, it’s time for a pair of veteran bands to show the kids how it’s done. Local legends Dub Sex saunter on stage looking rather out of place after the youthful exuberance that has gone before, but boy, did they mean business. Having been around for ages (well, including a 25-year gap when they split), they are intensely engaging and kick out a massive noise that defies their aged appearance.

On a similar note, The Nightingales is another group whose cult following have kept them going where the populace have missed out. And boy, do they not know what a spectacle they are missing. For their allotted forty minutes, the band doesn’t stop once. Each track blends seamlessly into the next as the now burgeoning crowd lap it up. Special mention must go to drummer/vocalist Fliss Kitson (ex-Violet Violet), who is as amazing to watch as she is to listen to.

Evil Blizzard is a real love-them-or-hate-them band. The punchline being they are happy with either thought, as they elicit loud boos from their ardent supporters, who seem to have appeared out of the woodwork just before their set. A masked group that features four bassists and no guitar may sound like something straight out of Spinal Tap, but somehow it works, and although their antagonistic approach doesn’t sit right with some people, they are very entertaining and have some cracking tunes.

How do you follow the theatrics of Evil Blizzard? It may have been a challenge for some, but Brex & the Extricated, the latest project for ex-Fall guitarist Brix Smith Start (that also boast another two ex-members, Steve and Paul Hanley). Playing a set that on the surface lacks the raw power of what had come prior; they nevertheless delivered a solid and winning set that both won new fans and satiated the faithful – a spattering of Fall tracks, in particular, went down a storm.

So onto the main event. There are very few bands like The Membranes; their punk roots show through like a bad dye job even when backed by the twenty-piece BIMM choir. It’s this addition – and a set that predominantly from the recent Dark Matter/Dark Energy album – that made the set so entertaining. Blame it on the wealth of talent that came before, the flagging energy of an audience that had stood through five hours of music already, or the copious amounts of overpriced beer consumed, but there appeared to be a distinct loss of focus in the crowd, though. Not that it mattered up on stage, as the ever-dependable John Robb strutted across the boards like a buffed-up Wilco Johnson. Surprisingly, he kept his shirt on, but it didn’t affect his performance as the band plough through the science-influenced tracks complete with corresponding video projection. Who would have thought songs about protons and supernovas would be so rocking. As mentioned, the choir added so much more to the proceedings and an extra depth to the powerful and energetic performance. With an equally short set as the bands that had gone before, it’s all over almost as soon as it’s begun, with just a ferocious rendition of Spike Milligan’s Tape Recorder to send us off into the night.

There aren’t many shows you can come out from these days in which you can honestly say you’ve not paid enough for. The event put on here at the Ritz is one of them. Seven fantastic bands for less than £15 is a steal. We’d like to say we still had change for a chippy supper, but the Ritz bar prices put pay to that. If you missed it, you really did miss out.