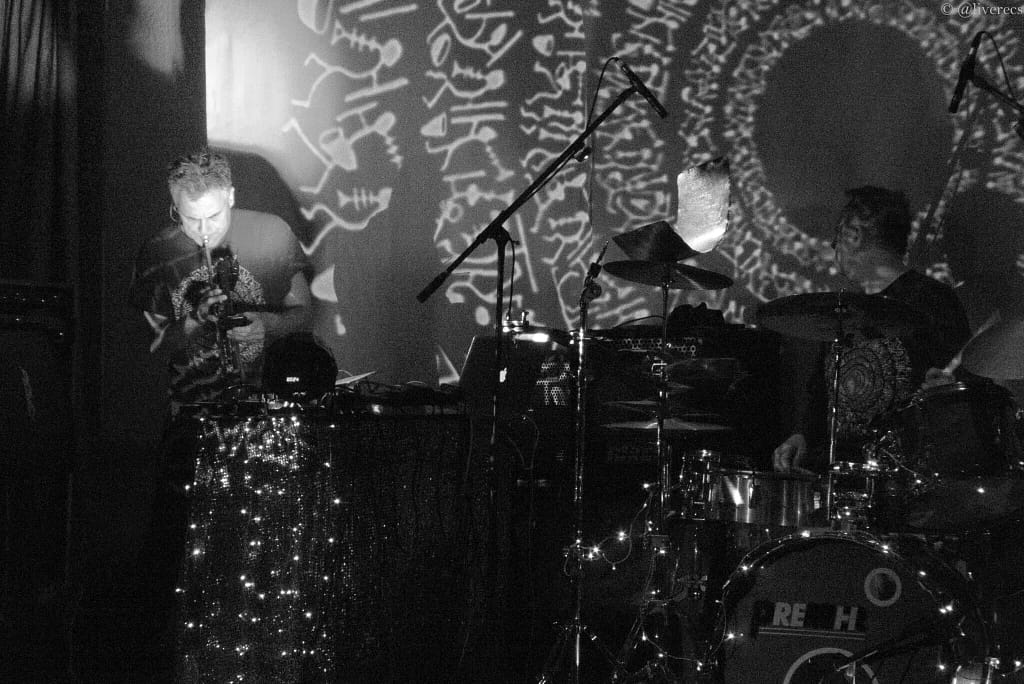 There’s a distinct lack of politics in popular music these days. The angry punks have all grown up and are advertising butter and the youngsters are more obsessed with Facebook ‘likes’ and Twitter followers to care about what’s going on outside their bubble. So it’s good to see bands that still care. They wear their political leanings like a badge of honour, but most importantly, they don’t let it get in the way of making some great music.

Percussion and trumpet duo Spaceheads is one such band. There’s no getting away from their message at the show tonight. Posters protesting against Donald Trump and the dismantling of the NHS are prominently displayed and there’s even a politically-charged poet. But the majority of the people at the old school social club tucked away in Whalley Range just outside of Manchester city centre are here to enjoy the music. You’re allowed to disagree with the political statement, but from the appearances of those present, and the response they give to the said poet, most of the people who have made the effort to turn out on a typically drizzly Manchester Friday night are on-side.

Opening the night, however, was Elle Mary, who steps up to the mic clutching her Rickenbacker guitar and entrances the audience with a selection of heartfelt tracks and her stunning voice.

Prior to the main event, poet and activist Steph Pike explains a little about the causes the acts are fighting for, in particular the People’s Assembly and the march on Parliament in support of the NHS that was taking place the following day. It’s an important cause but it’s such a shame that we actually have the need to spell out to people that it needs saving from the ravishes of an uncaring and money-hungry government.

By the time Spaceheads hit the stage, the venue is packed. The bar is doing a brisk trade – bolstered by the ridiculously cheap prices (we need more social clubs in our provinces!) and everybody seems to be up for a good time. Which is what they get from Andy Diagram and Richard Harrison. The pair create some beautiful sounds with just drums (and assorted percussive implements – which later on include some squeaky pigs) and a trumpet plugged into an effects system that loops and distorts the notes perfectly. Backing the band is their regular collaborator Jaime Rory Lucy’s Rucksack Cinema, who provides some amazing video projections tailored for the music in the set.

As for that music, it’s hard to categorise what Spaceheads sounds like. If you were to think jazz, funk, dance and high energy electronic classical pop, you probably still wouldn’t be anywhere near. What it is, though, is immensely catchy and very danceable, as is proved as the audience fill the floor with their gyrating, rhythmic movements. As unique as the sound is the equipment they use. Richard Harrison’s drum kit is augmented by bent metal strips and anything that can make a noise while Andy Diagram’s trumpet is fed through a computer system that allows for loops and embellishments to flavour the music. They’re controlled by an iPhone attached to a fish slice on the end of his horn, giving the gloriously catchy melodies a new dimension.

As Diagram wanders the dancefloor like a new-age Pied Piper, the energy in the room lifts beyond any expectations. Playing a set that spans the band’s last few releases – including the latest EP Laughing Water – the duo work their way through the set, allowing the feelings to dictate where each piece will go, improvised moments pepper the songs making it a unique and enthralling experience – one that your feet won’t stop moving to. Spaceheads live is not a recital, more a happening. Unreleased track, The Revolution Sashays Up the Mall is doubly fitting tonight, with the NHS march planned for the following day, and while there may not be a rousing chorus to sing or catchy lyric to shout, the beat sure does stick in your head as the best ear worm should.

The projections that accompany the music are perfectly fitting; during Trip to the Moon, for example, extracts from the Georges Méliès film of the same name (you know, the one with the rocket landing straight in the moon’s eye). The shape of the room is utilised perfectly, with images engulfing the ceiling and the side of the stage as well as the rear. It’s a euphoric experience that really makes the already intimate surroundings closer.

As they finish with the ever popular Sun Radar, it’s over far too soon. A stunning evening; make sure you don’t miss Spaceheads when they next play whatever quirky or hidden venue they choose to occupy.  There may not be any lyrics of protest, but there’s no denying Spaceheads’ commitment and integrity when it comes to politics, something music should always embrace.

Find out more about the band at http://spaceheads.co.uk.