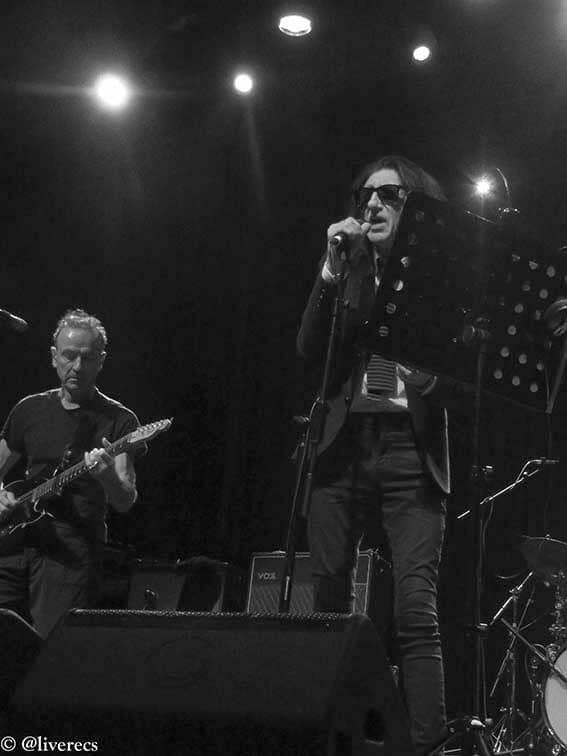 One of the more eccentric collaborations of the year was the pairing of ‘the Bard of Salford’ Dr John Cooper Clarke and former Stranglers frontman Hugh Cornwell. The resulting album, This Time it’s Personal turned out to be one of the most unique and enjoyable of the year.

The evening at the famous (well, it was mentioned in one of Clarke’s old poems, Salome Malony) Ritz in Manchester began with an enthusiastic set from local lads Larkins (gracing the stage at the venue for the second time in only a few weeks, having occupied the same slot on The Slow Readers Club show. Having a mere twenty-five minutes to win over a crowd who – on average – are old enough to be the grandfathers of the band members, the four piece do a sterling job, and even manage to make themselves heard over the apathetic murmurings of what constitutes a paying audience nowadays. Larkins show their worth and give way to a short spoken word set from Mike Garry, another Manchester poet, but this one has the Bridgewater Canal running through his veins. His passion for the city, its residents and more is felt in every syllable. We’re treated to his ode to Tony Wilson, St Anthony and the beautiful eulogy to his mother. Several times during his set, he makes barbed comments about the chatter in the room. When it’s one man’s voice on the stage it’s even more pronounced. As a punter, it’s frustrating; as an artist it must be downright annoying.

Sadly, it’s not just the opening acts who suffer the indignity of the ‘fans’ who just can’t keep their mouths shut. As Dr John and Hugh arrive on stage – flanked by Hugh’s ‘orchestra’, who make up the touring band – it’s clear the nature of the music (at least for the first part of the set) is a little out of some of the audience’s comfort zone. They’d more likely sooner be pogoing or spilling their drinks down the backs of fellow ticket buyers than actually listening. Regardless, the band plays on. The first hour of the show is made up of the ten tracks on the album – out or sequence, at least. In between songs John jokes with the audience and with Hugh. It’s very apparent that the pair has a genuine bond and seeing them share some banter – often off mic but still audible to those at the front – is almost like being privy to some private session. The second song, Way Down Yonder in New Orleans is given a Mancunian twist as John renames the it Newall Green. Hugh just jokes with him that he actually comes from Essex (where the Salfordian legend now lives), giving Johnny an excuse to break into his best Essex twang.

The revamped classics continue with the sublime rendition of Johnny Remember Me, originally produced by the infamous Joe Meek. Since it follows Spanish Harlem, a track written by Phil Spector and Jerry Leiber, John quips that they’re not only going to play songs written or arranged by murderers. This between song banter keeps those whose musical taste may not extend beyond 1976 interested.

A splendid and grandiose version of Jimmy Webb’s MacArthur Park could have easily been a show closer, but here it’s midway through the main set. Dr John’s voice is surprisingly well suited to the songs, his clipped Northern twang adding to rather than detracting from the tone. In fact, it’s actually really pleasing. However, at times the vocals are drowned out in the mix. It doesn’t detract from the enjoyment, though.

After the main set of the album tracks, Hugh and the band return sans Dr John for a quartet of more familiar tracks. A stunningly sexy rendition of Stranglers’ classic Nice n’ Sleazy appeases some sections of the crowd that were uncomfortable with the rock n’ roll standards, although there are still some sections who don’t realise they should be listening rather than chatting. The mammoth cover of Walk On By (which became a Stranglers’ standard) It’s not too long before Clarke swaggers back on stage to join the group in a pair of his own compositions. It’s often forgotten that his albums were actually set to music, so familiar we are with the spoken word versions of his prose. So hearing I Wanna Be Yours and 36 Hours with full accompaniment was a treat; even if the updated arrangements took a little getting used to.
With the Ritz’s Saturday night early curfew drawing in (have to get those clubbers in to buy more overpriced lager), there are only two songs left. Both of them were very familiar Stranglers tracks, but this time, the duo shared vocal duties. It’s a combination that doesn’t quite hit the spot of perfection, but is fun and entertaining, nevertheless.

Overall, despite enjoying the show immensely, it’s an uneasy alliance of two brilliant minds that perhaps comes across a little awkwardly on stage. Perhaps a more sedate venue would suit what they are trying to do? This is a pair of artists branded with the punk label having fun with some music they grew up with. That much is clear and the fact they are enjoying it so much is infectious. It would be interesting to see if the collaboration continues as it would be a shame to see the end of a beautiful partnership.