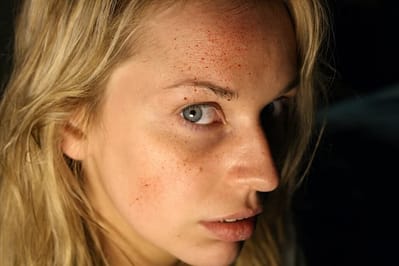 Izzy Lee is no stranger to this blog, having reviewed two of her earlier shorts, Legitimate (2013) and Picket (2014). Both of those films contained a strong sociopolitical message and earmarked Izzy as a director to content with in the future. With her latest short, Postpartum she points the lens at another important issue, but yet again, given a macabre and sinister twist.

Diana (Diana Porter) hasn’t seen her friend Holly (Kasey Lansdale) for months; with calls unanswered and deeply worried, she heads over to her apartment to see what’s wrong. An eviction notice is taped to the front door. Even more concerned now, she hammers on the door, until Holly opens up. She’s angry at all the noise, and is looking incredibly dishevelled; it’s as though she hasn’t slept in a while. It transpires that her baby is sick; “Baby?” Diana clearly didn’t know her friend was expecting. She’s even more concerned when Holly winces – holding her head as if attempting to block out some agonising noise – then looks up, with maniacally glazed eyes, “He’s stopped”. Diana sees the room has been ransacked, and there’s a putrid smell which has her gagging. She’s clearly concerned for the welfare of the baby as well as her friend, who is obviously very unwell too.
As it’s only a seven minute film, it’s not really fair to divulge much more of the story. You could probably guess certain elements anyway, particularly given the title. What you won’t guess is how twisted it gets, and there’s more than a few shocks in store along the way within the brief running time.

With an remarkably immersive sound design (thanks to all-rounder Bryan McKay – who also handles the fluid and natural cinematography), and complementary score by Shayne Gryn, which is never overpowering or obvious, it’s a joy to watch no matter how grim and disturbing the subject and visuals are.
Izzy Lee is part of a new breed of horror directors (who, I’ve no doubt, could also turn their hands to other genres too) coming up at the moment. What’s brilliant, and purely co-incidental, is this young blood are mainly female. Alongside now-established talent such as the Soska Sisters, we have directors such as Izzy, Maude Michaud (Dys-), Jill Sixx Gevargizian (Call Girl), Jennifer Kent (The Babadook), among many others who form this new breed of director who are making this genre exciting again. Gender is irrelevant, as it should be, and these filmmakers are pulling no punches with what they are depicting on screen.

If there’s any sense and justice in the world (yeah, I know there isn’t, but I can hope) film festivals the globe over will pick up Postpartum to add to their roster. With many more projects in the pipeline for release later this year, and after being fundamental in the fundraising for the bronze bust of Edgar Allan Poe that now proudly sits in the Boston Public Library, Izzy Lee is going to be a name you will be hearing more of, and for all the right reasons. In the meantime, sales of clingfilm will be going through the roof…
8 out of 10
Share on Facebook
Tweet