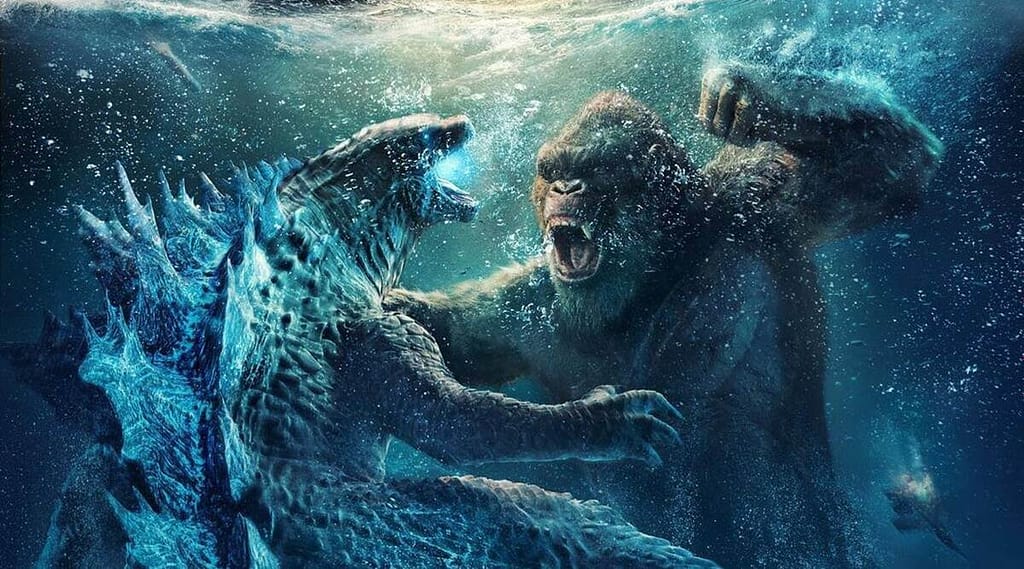 When it was announced that Adam Wingard would be directing the big team-up movie for Warners/Legendary’s Titans my hopes were raised. Aside from the blip that was Blair Witch (2016), his output has been fantastic. Following the excellent Kong: Skull Island (2017), and the two disappointing Godzilla films is a big ask, and fortunately, Wingard doesn’t disappoint.

It’s 10 years of Kong being under observation on Skull Island and several years since Godzilla saved mankind from the other Titans. A sudden Godzilla attack on at US base owned by Apex, the company run by Elon Musk-like billionaire Walter Simmons (Demián Bichir). In the base at the time is a conspiracy podcaster Bernie Hayes (Brian Tyree Henry), who manages to hack Apex’s computers just before Godzilla lays waste to almost everything. Simmons approaches Nathan Lind (Alexander Skarsgård), who has written a book theorising about ‘Hollow Earth’ saying that he believes that is where a source of power may be that could stop further attacks. Simmons is clearly a boo-hiss pantomime villain, but logic never comes into these things, so Nathan and Kong-whisperer Ilene Andrews (Rebecca Hall) set off with Kong and what seems like a whole army to find the Antarctic entrance to the centre of the Earth. In a surprising lack of health and safety, deaf Skull Island youngling Jia (Kaylee Hottle) is brought along too. Fortunately, she can communicate with the giant ape to bring him ‘on side’, particularly since Godzilla tracks them down and strikes to bring the big guy down.

Meanwhile, MONARCH, the organisation meant to oversee all Titan activity get a notification that Godzilla is heading for Japan, which just happens to be where Apex has another lab that is preparing to utilise the power found in the Hollow Earth. Oh, and Madison Russell (Millie Bobby Brown), her friend Josh (Julian Dennison), and Bernie do some investigating and end up in the thick of the battle.

The most common complaint about the previous rebooted Godzilla instalments was the focus on humans rather than kaiju. Godzilla vs Kong remedies that somewhat by having plenty of action as the beasts demolish buildings, ships, planes and anything else that may be in their way. There’s still a fair bit of human story, though, and for the most part, this is ok. The unlikeliness of a trio of geeks hitching a ride on a speeding underworld train pod without being seen by CCTV or even a passing security guard is Bond-level unbelievable. That said, we’re watching giant monsters so we have to expect a little suspension of disbelief.

It’s a shame that the film has had to be experienced streaming as this would be a slam dunk at the cinema. Hopefully, when thing open and get moving again Warners will give the film a release and people will support it by seeing it the way it should have been. Until then, you can catch the movie on the premium VOD sites.

Godzilla vs Kong delivers what fans wanted: a pair of Titans knocking seven bells out of each other and then tag-teaming against a robot nemesis.