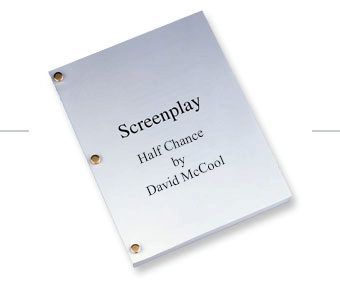 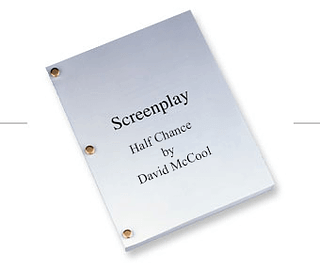 Now it’s not often you are given a script to review, but that’s what has happened here, so forgive me if it’s a kind of vague essay as I really don’t want to be revealing too much about the content, or the secrets. Half Chance comes from David McCool, who wrote, directed, and starred in the recent short A Bloodstained Butterfly, which I really enjoyed. Although this wasn’t the final shooting script, I managed to get a good idea of where it was coming from and what to expect, and was easily visualised.

It tells the story Matt, who has just moved to a small town and when visiting a small café meets a beautiful waitress, Alison, who he has an instant attraction to, and with whom they have so much in common, as well as an uneasy feeling that they’ve met before. Their initial meeting is disrupted by an uncouth idiot, Edward, barging in drunk and demanding a drink. Despite threatening Alison (and Matt, who attempts to stick up for her) with a chainsaw chain, he is sent on his way, and the pair hook up and begin a relationship. Unfortunately, a particularly romantic date turns sour when the bully Edward once again comes on the scene.
Now, from that description, you may well be thinking, ‘So what?’ Well, what it would be unfair for me to reveal is how the narrative takes a drastic turn for the strange, culminating in what could well be an amazing Twilight Zone-esq tale which would bend minds as well as tug at the heartstrings.
This is certainly a story which needs to be made, and I look forward to being on the front line of the reviews once it is!
For more information on David McCool, check out his website. You can view his first short – an incredibly inventive and effective diversion entitled Sparks below.
Sparks: A Short Horror Film from David McCool on Vimeo.
Share on Facebook
Tweet