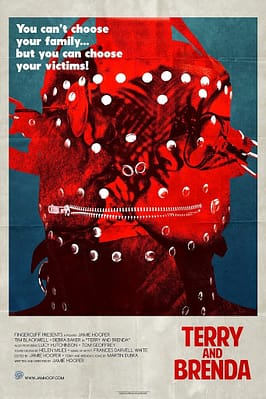 Not all short films have to have a shock value, some can make their point quite subtly. Jamie Hooper’s latest, Terry and Brenda has a little of both.
The titular couple (Tim Blackwell and Debra Baker) are a typical slobby northern pair. They sit feeding their faces in their gaudily decorated living room, watching TV, discussing their friend’s party and making lewd comments to each other. “I’ll make fish fingers“; “I’ll give you fish fingers later” However, you can tell there’s something sinister underneath the banality. Well, it wouldn’t be much of a horror short if there wasn’t would it?

Without wanting to reveal too much of the film’s secrets (it’s only 15minutes long, and, as ever, the joy is in discovering for one’s self), the film reveals the couple’s strange peccadilloes (hinted at in the film poster) but also manages to completely subvert expectations a number of times.

Hooper has utilised a very simple setup – think The Royle Family – to create an atmosphere of disquiet. Following the otherwise mundane conversation (particularly hinted at in the film’s tagline) leads the viewer to come to the natural conclusion of their intentions and sinister hobby. When the reality behind the couple’s relationship is shown it’s both a joy and a shock – but it’s not over then. Further revelations make it even more fun and macabre. The performances are the right side of caricature, and while they could be in danger of going OTT, they manage to remain fun and alarmingly believable.

I’m not sure if it was intentional or not – and having seen photos of the actor ‘looking normal’ I can only assume it was – but Debra Baker’s Brenda is a dead ringer for a young Queenie Watts, a regular feature in ’60s and ’70s British comedies. Without being overly showy, Hooper has made a fun short which will no doubt be a crowd pleaser at upcoming festivals. Make sure you see it should you get a chance – it might even inspire you to re-watch Robocop.

Terry and Brenda – Teaser Trailer from Jamie Hooper on Vimeo.