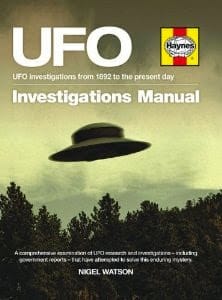 Unlike the other ‘novelty’ manuals which the esteemed publishers Haynes produce alongside their car maintenance ones, this UFO tome is actually of interest and manages to hold the attention longer than some.

What we have is actually an informative and engrossing look at the UFO phenomena in all its forms, and from a very serious and rather believable standing. From case files to hoaxes and all points in between the author makes what could have been a throwaway lighthearted read into something which makes one think.
Naturally, if you’re picking the book up, the chances are you would have more than a passing interest in the notion – or indeed a little glimmer of hope – that there’s life elsewhere. Over the course of 160-odd pages, there’s plenty of food for thought, which might not convert the skeptics but is certainly entertaining and informative enough to keep one turning the pages.
Among the great chapters there’s some fantastic photographs, and, as mentioned, the subject of hoaxes and fakes is covered with the same seriousness and explains in detail how many of the images and videos have been debunked – naturally one of the main parts of any UFO investigators’ jobs.
Mystical places are touched upon in one chapter, with the stones at Stonehenge and Avebury as well as Glastonbury Tor being singled out. The photos used to illustrate the informative text are as enthralling as they should be. Regardless of one’s viewpoint, it’s certainly a page turner.
It’s a handsome book, which will no doubt keep you returning to flick through and enjoy time and again. You never know, you may well pick up some UFO spotting tips with the information given on how to actually go about being a UFO investigator. Results are not guaranteed, but at least you’ll get out in the open air.
It sure beats having a dog-eared, grease-stained copy of the Haynes ’91 Fiesta Manual lying about.
8 out of 10
Share on Facebook
Tweet