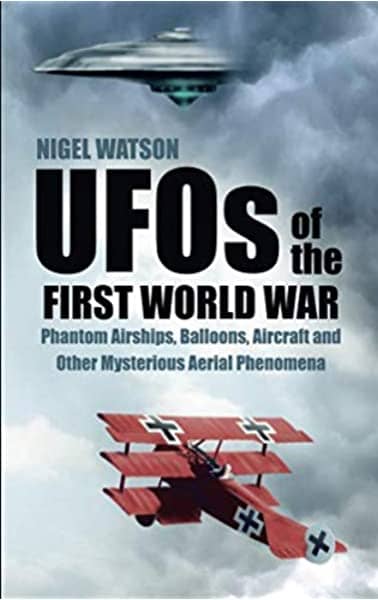 While UFO sightings may seem to be a common thing (whatever your view on their legitimacy) in our generation, this new book takes a look at the spate of recorded instances from just before the turn of the century up to the end of the First World War.
This was a time, of course, when man was actually taking to the skies very successfully. While the late Victorians had stories of hot air balloons and airships, the war brought winged fighting machines. And as seeing things in the sky were a new experience, could it be that this set off fertile imaginations. Ancient man had to try to understand the Sun and the stars, but these new-fangled inventions could prove to be too much for the average person to comprehend at the time.
So this book sets out to discuss the recorded instances of ‘sightings’, keeping them well within context of the time. Detailing the events in as much first-hand accounts as possible, it’s a surprisingly eye-opening read. So much so that it could even be fascinating to those with an interest in war history. And while it’s clear the author is a firm believer in flying saucers – or whatever you’d call them – the text is very much fact-based, and far from preachy or condescending.
Unlike the previous book of Watson’s that I reviewed, The Haynes UFO Investigations Manual, this work is more for those serious about sightings and the phenomena. Yes, it’s a dense, almost clinical read, but that’s not to say it’s not a riveting one. The only complaint is one for which there is no answer – the lack of photographic evidence from the time – so it’s certainly not a fault of the book. There are illustrations – of varying quality, but interesting – but it’s the insightful text which keeps you reading page after page.
While I’m not sure it would make a believer out of you, it certainly is food for thought.
8 out of 10