I live in Manchester, the City of Salford to be precise, Ewan MacColl’s Dirty Old Town. I do, however, make many trips down to the big smoke… London.
One of my passions is photography, so you may well see some examples of that pop up now and again. Now, while in London I try whenever possible to pay a visit to the wonderful Highgate Cemetery. I think it was Sir John Betjeman that called it “a Victorian Valhalla” and that expression sums the place up lovely. Even if you have no interest in the gothic, or Victorian way of death.. it’s a place you should really go and see. The older West side of the Cemetery is only accessable by a guided tour, but these are worth taking because you learn a lot about the ways we dealt with the dead in the past, and indeed celebrated it. But also some of the monuments are simply stunning. The West side is now Grade 1 listed by the English Heritage and is run by the charity Friends of Highgate Cemetery, and they do need your donations so go and support them and do the tour! Check out their official website for more info http://www.highgate-cemetery.org/

So now, my personal piece on Highgate. I have taken so many photos of the graves and surroundings its unbelievable. And I can promise, that I will go again and take many more. I always find a different angle, or indeed find a new interesting grave.
There are many notable people buried in Highgate, from history and indeed, from showbiz. Probably the most famous is Karl Marx. So I wont go over ground that has been done to death (yep, pun intended) and instead I will celebrate the ones that maybe have slipped through the “net” (oh dear, another bad pun) and are not commonly shown. I may go further into this in later blogs as its a favourite subject of mine, but for now, lets have a look at some of the other people who reside in Highgate Cemetery.. 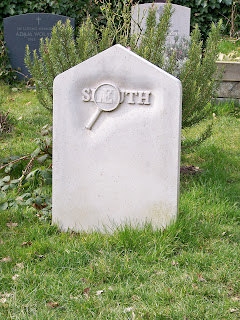 Anthony Shaffer’s wonderful gravestone. Its almost obscured by an overgrown plant at the front now, but so it’s easy to miss.. but hopefully the motif on the back helps people find it. Shaffer also wrote the screenplay for one of my favourite films, The Wicker Man (1973) which no doubt will be mentioned in blogs to come…. 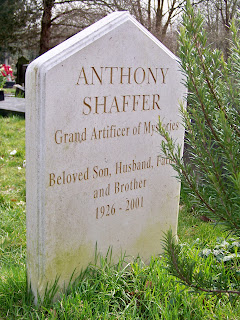 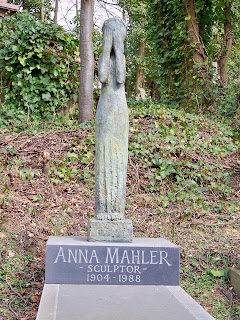 Anna Mahler’s gravestone is a copy of one of her own sculptures. Her parents were the celebrated composers Alma Mahler and Gustav Mahler. 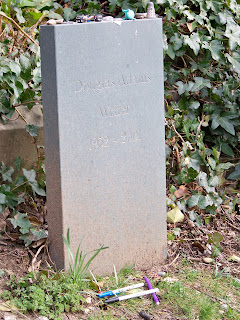 Douglas Adams probably doesn’t need an introduction to many people. He died way too soon, but left some wonderful novels. Tributes are often left at his grave, some seen here, including wonderfully a small sperm whale and strangely a dalek, I guess the connection being BBC Sci Fi? There’s a tendency for pens and towels to be left also, wonderful references to the man’s work. 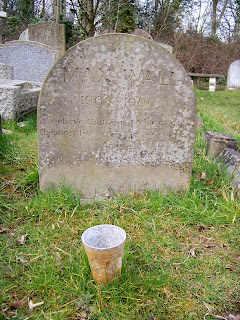 Finally for now, Max Wall. when I was growing up in the 70s and early 80s he was a regular on British TV and often mimiked in my house, although I can’t ever say I wore the tights… His early music hall act is said to have inspired Monty Python’s Ministry of Silly Walks..  He tried to get away from his music hall image, even releasing a version of Ian Dury’s “England’s Glory” and appearing on stage with him, although these didnt go down too well apparently. He finally broke into serious acting and won acclaim for “Waiting For Godot” and others..  His stone has the wonderful quote “I believe that since my life began the most I’ve had is just a talent to amuse” which if I’m not mistaken, is a Noel Coward quote.
More Highgate musing will follow after the break…