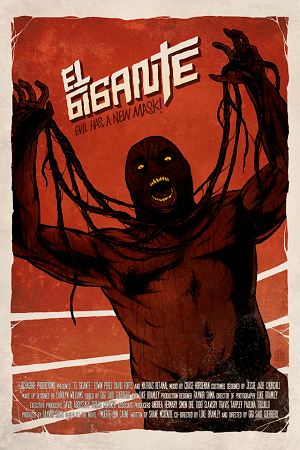 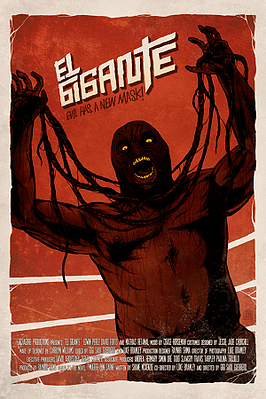 With a set-up which could very well come from a hard-hitting, serious drama, the short film El Gigante attacks the senses from the get-go.
A young Mexican uses the last of his money to pay a smuggler to get his wife and kids into America, leaving him to find his own way in. Which he just about manages; through a fence and into the vast desert expanse of the Southern States. A man he thinks will be his saviour will in fact plunge him deep into a terrifying and painful ordeal.
He awakes in a filthy wrestling ring; a sackcloth mask stitched onto his head, in front of him the thing of nightmares. A behemoth named El Gigante.
Co-directed by Gigi Saul Guerreo and cinematographer Luke Bramley, and based on the first chapter of a book by Shane McKenzie, the short is an outlandish and haunting trip into the sick and depraved underbelly of civilisation. The characters who populate the bizarre and disturbing world the poor immigrant finds himself are the type who would keep David Lynch up at night.
Shot with an eye for the grotesque, and a sound design just as distressing as the visuals, El Giganteprovides an intriguing entre to the world McKenzie has created in his acclaimed book Muerte Con Carne, and that might well be the only downside to the short. It leaves you wanting more. Sure, the scenes that play over the end credits are a satisfying coda, but this is merely the first chapter of the book, and one can only hope Luchagore Productions manage to raise the finances to expand El Gigante to feature length. The original Kickstarterpitch promised that this would be opening scene of the full movie, and what an opener!

Within the short 14 minutes, the film pummels the senses with a visceral attack as ferocious as the assault delivered by the wrestling titan depicted. Not only with the actual ‘wrestling’ – which leaves the viewer feeling as though they’ve been sucker-punched themselves – but in the things that go on surrounding the ring. A ‘dog’ character – presumably a captive stitched into a dog costume – is terrifying, running around and getting in the face of the poor unfortunate immigrant and generally being scary. There’s also a grubby, cackling family sat around watching the action, eagerly awaiting the result.
For a short with such a low budget, everything screams class. The set design is as outlandishly disturbing as it comes, one can almost smell it. The practical make-up effects are not overdone, giving them an even more real feel, and that sound! Watching the film on a PC screener with headphones was a gut-wrenching experience, I can only imagine how much more powerful it would be on a proper cinema system. The film is currently doing the festival circuit, and hopefully everyone will get the chance to see it, and the right people put their hands in their pockets to make the feature-length version a reality. It needsto happen!
Check out the trailer below:
9 out of 10
Share on Facebook
Tweet