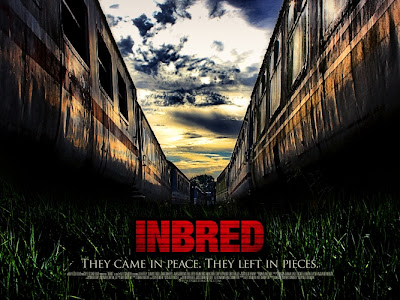 Writer/director Alex Chandon came on my radar back in the early 90s when his cheaply shot on video shorts Bad Karma and Drillbit began doing the rounds of horror fans via illicit VHS tapes, swapped or sold via the small ads in fanzines. After his last film, Cradle of Fear hit big with the fans he’s been a little quiet, so it’s great to see him back behind the camera with Inbred, just out on DVD/Blu-ray after wowing fans at the festivals for the last year. 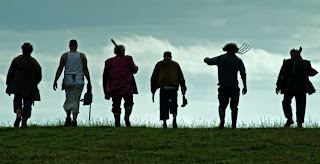 A group of teenage offenders are being taken on a team/character building weekend by their two support workers, Kate (Jo Hartley) and Jeff (James Doherty). The big mistake they make is taking this obnoxious bunch of tearaways to a remote Yorkshire village of Mortlake, where outsiders are not particularly welcome, but do at least get to participate in the local’s “show”.
From the moment they set foot in the pub, The Dirty Hole, a place which makes the Slaughtered Lamb look like Disneyland, things are bound to go wrong. The only food on offer is home made pork scratchings; “The sign says hot food available here” quizzes Jeff to friendly but odd landlord Jim (Seamus O’Neal) “it says NOT food available here”, this and the lack of Coca-cola (the group have to make do with a very suspicious looking homemade lemonade) means they don’t intend to stay too long in the hostelry.
Setting about doing some “work”; salvaging copper from some abandoned railway carriages, two of the kids, Sam (Nadine Rose Mulkerrin) and Tim (James Burrows, also seen in Eden Lake) fall foul of three of the yokels, led by suitably creepy Gris (Neil Leiper). Jeff is accidentally injured while attempting to protect his charges, and while trying to get help from Jim, things suddenly get a whole lot worse for the group.

While on paper it may look like you’ve seen this all before, Chandon has surpassed all his previous output and made a wonderfully gory black comedy that is, and this is important as lots of films fail on this count, actually really scary. You just do not know how far these locals will go to “keep to themselves” From the bizarre shows that the visitors participate in (whether they like it or not); complete with a minstrel ringleader (PC? Not on Chandon’s watch), which of course draws likeness’ to that other insular village, Royston Vasey but my mind went instantly to Trevor Howard in the glorious Sir Henry at Rawlinson End, to the village’s band of quite literally inbred folk – most with the same dental problems – strange peccadilloes (wait until you see the porno mags!) and their own village anthem, the surprisingly catchy “Ee by Gum” (written by long time Chandon collaborator Neil Keenan). The score (by Dave Andrews) is fantastic in itself, as is Ollie Downey’s cinematography, who makes the stunning Yorkshire dales a foreboding place.

An appearance from one of Emmerdale’s most lovable actors, Dominic (Paddy) Brunt as the twitching, chainsaw wielding Podge is a highlight. (check out my review of his film, Before Dawn here) His Leatherface dance is brilliant, and he clearly having a ball, as are the other actors. Mat Fraser, the actor who thrilled us all in Kung Fu Flid, even pops up at one point. There is also a brief appearance from British scream queen Emily Booth which is hilarious.

Despite the oddness of the locals, there is no attempt in the film to ridicule them or portray them as outcasts. They are just people with a different way of life. A homicidal, bestial and cannibalistic way, granted, but it is their way.
Full marks go also to the film’s special effects, there’s plenty of gore on offer here and it is surprisingly effective, with practical effects, polished off digitally. 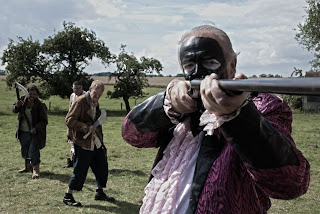 The Blu-ray release is topped off with an hour or so of on set video diary type featurettes, which are entertaining and show the fun the crew and especially Chandon had while making the film.
Highly recommended for those with both a strong stomach and a wickedly dark sense of humour. A cult classic already.
9 out of 10 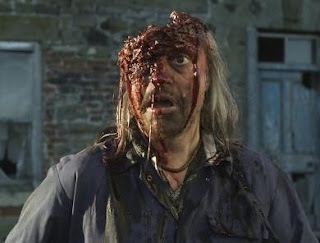