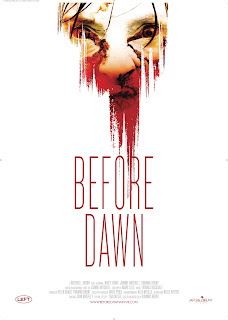 Back in April I attended the rather ill advised (or at least badly organised/advertised) “MancMonCon”. The highlight was seeing a 15 minute preview of Before Dawn, yet another indie zombie movie. I read the blurb and took the chance. Little did I know the director/star of said film was none other than TV soap vet Paddy from Emmerdale, Dominic Brunt. I was aware before this that he co-ran (with co-star Mark Charnock – Marlon) the annual Leeds Zombie Festival, but not about his aspirations as full blown horror star/director. Even from this short extract I was blown away by Brunt’s take on the genre, and I finally managed to catch the full film at Grimmfest in Manchester, where the cast & crew were interviewed on stage afterwards by Starburst Magazine’s Paul Mount (of Paul Mount’s TV Zone fame). 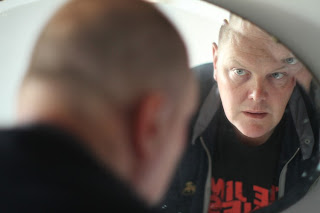 Alex (Brunt) and Meg (Joanne Mitchell) are having marriage problems, and in an attempt to save their union have left the kids with Meg’s mum, Eileen (Eileen O’Brien) and rented a cottage away from it all in the middle of the Yorkshire moors. Alex is trying desperately to have Meg to himself, even hiding her phone as the constant interruptions threaten their peace. When she goes out jogging and is attacked and bitten by what seems to be a rabid stranger, any thought of peace goes out the window as it becomes apparent that all is not right with the outside world. 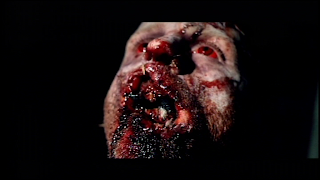 The film marks Brunt’s directorial debut and he does a fantastic job of creating a believable, real world scenario juxtaposed with a horrific zombie apocalypse. Hints that something is wrong are given from the very beginning; a distant scream, an abandoned car, but they are more than just clumsy plot pointers, they ease us into the nightmare scenario. The undead threat here are of the 28 Days Later rage filled variety – with a neat little twist in that they appear dormant until roused by anything nearby – and are truly terrifying. Alex’s first encounter with one in the garage is brilliant – tense and exciting. An interesting development brought in later in the film (as well as plenty of exposition) by a cameo from Shameless star Nicky Evans (who looks like he’s been transported from the set of a 70s grindhouse film) causes Alex to make a decision that can only be made by a man so desperate to save what he can of his life. Had this just been a regular marriage in crisis film it would have been powerful enough, the added zombies and gore (of which there is a surprisingly large amount) amps the tension. It is probably the scariest zombie film for a while, and it doesn’t fall for the cliches of “oh here’s a gun – blam! blam!” What we have here is more akin to kitchen sink horror, those involved have never had to fight for their lives before so wielding a weapon is not second nature.
The music compliments the visuals perfectly, idyllic then aggressive when it has to be, and everyone involved should be very proud and happy with the result. While I can’t see it being a crowd pleaser (it is far too downbeat for that) it deserves a major release and success.

Before Dawn is expected to have a DVD release early next year, with a possible cinema run too but until then it is doing the festival circuit. Make sure go and see it. More than highly recommended.
9 out of 10