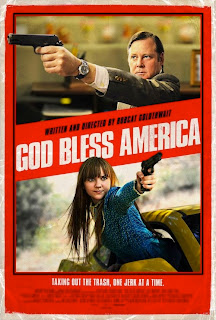 If ever there was a film that put forward almost all my current feelings about the state of the world at the moment, it is this one. Surprisingly, it comes from the brain of annoying voiced reject from the Police Academy sequels, Bobcat Goldthwait. You may also remember him in the much more watchable Scrooged (1988), arguably one of the best versions of the Dickens classic.

God Bless America tells the story of Frank (Joel Murray, Hatchet), a regular Joe who is becoming increasingly pissed off with constant diet of reality TV, cruel ‘talent’ shows and the general way people are in the 21st Century. When he’s diagnosed with a brain tumour, dismissed from his job for doing what he sees as a good turn, and distraught that his estranged daughter has become a spoilt brat, he decides enough is enough and rather than take the bullet himself, he begins gunning down all that he thinks is wrong with America. Along for the ride, and under false pretenses, is equally rebellious and opinionated teen Roxy (Tara Lynne Barr). Together they head across country with their shared hatred with what the world has become.

As biting a satire as you’re ever likely to see, the first half of the film is spot on with its observations, and manages to create situations which, if seen on TV for real, you would have no problem with believing, and despising. Once the duo head out on their killing spree, it becomes a slightly different beast, almost coming apart at the seams before bowing out in a blaze of glory.
All the targets are worthy, the inane American Idol shows, with their willingness to mock those who desperately seek fame but don’t have the talent to earn it. The glossy reality shows which follow  kids and their vacuous parents. Inane commercials peddling the latest ‘humourous’ ringtone.
The opening sequence, with Frank laying, Jesus Christ pose, fantasing about killing his inconsiderate, noisy neighbours, blasting their constantly screaming baby with a pump action shotgun, sets the films intentions from the outset.

While it’s hard to justify the harsh actions of a man pushed to the limit, à la Falling Down, the verbal tirades make for hilarious, if often sobering viewing. Amusingly, Roxy has a rant at Diablo Cody (“the only stripper who suffers from too much self esteem“) and her sassy teen creation Juno while being almost the same construct.
Without the killing spree, the film could have been a Network for the new Century, but as it is, as much as it is entertaining, it’s hard to justify murder. The film is at its strongest when it’s just the two leads discussing the ills of the world like adults.
Another major plus point for the film is the simply stunning soundtrack. Filled with great songs by fabulous artists, from Black Rebel Motorcycle Club’s Beat The Devil’s Tattoo, no less than three songs by Alice Cooper (who gets a fantastic tribute also) to the brilliant cover of The Kinks’ I’m Not Like Everybody Else (the original punk anthem) by The Chocolate Watchband.

If you’ve sat down on a Saturday night and looked at your Facebook or Twitter feeds and seen nothing but imbecile comments on whatever crap is on TV and felt sick to the pit of your stomach, then this film is for you. If you watch those shows, don’t bother because all you’ll get out of this is “wow – those killings were cool“; which I doubt is the reaction Goldthwait wanted.
9 out of 10