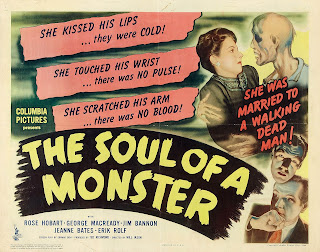 Doctor George Winson (George Macready) is dying. A selfless man, who always went the extra mile for others is at his deathbed from an infection caught when his glove tore. “It’s a cock eyed world“; people on the street can’t believe it. His wife, Ann (Jeanne Bates) won’t believe it. Over the open fire in the room he is set to die in, she makes a plea to anyone – anything – that can save him.

Across the town, a strange woman is walking almost trance like, with purpose. She causes cars to almost run her over, electricity wires come falling down spraying sparks in her wake. She keeps on walking until she appears at the Doctor’s room. Lillian Gregg (Rose Hobart) is there to take control. She has come to save the doctor when no medicine can help. “You called for me” She insists on everyone leaving, Ann, and the doctor’s friends, Fred (Erik Rolf) and Dr Roger Vance (Jim Bannon). Having hours alone with Lillian does the doctor wonders, and he fully recovers within weeks, but he is a changed man. The nice, kind, generous man is no more. He is now cruel, foul tempered and suspicious. George even makes fresh flowers wither and die with just a touch.

Lillian however, has other plans for George. She begins using a her power over him to her advantage.
Back at work, with his assistant Dr Vance, things are getting tense. A minor squabble nearly breaks into a fight, and, holding George’s wrists to protect himself, Vance discovers George has no pulse! While examining a young boy, George accidentally gets cut by a pair of scissors, but no blood! Could it be that bringing back George from the brink of death has robbed him of his mortal soul?

A rare Columbia Pictures release, The Soul Of A Monster is a strange little film. At times it feels like a lost Val Lewton classic, then it goes all preachy and could be a morality tale straight from of the Bible belt. It’s the heavy handedness of the spiritual side of the film that lets it down, you are practically bashed over the head with metaphysics of the soul and how one who looks to any other ‘God’ for guidance is wrong and soulless.
Towards the end, characters end up saying the same lines that have just been spoke. A caption card at the end of the film says it all “For the man who walks with evil walks alone; he who walks with evil has no soul,no hope; he lives but a life without faith, and without faith there is no life.“

Ok, so I’m not a ‘believer’ so maybe that’s why this felt a little heavy for me, but by the end, it did feel like it was bashing you over the head with it! Enough already! Just show me the horror! Still, it’s effective in it’s atmosphere in parts and features some unusual jaunty camera angles and tricks that you don’t often see in films of it’s age (as Lillian appears, then disappears at the end the film briefly goes into negative) , while not living up to it’s poster hype, doesn’t drag on too much.
5 out of 10.