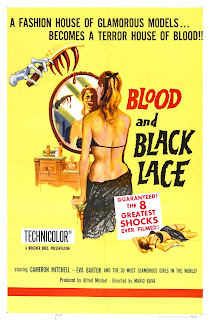 Long before the slasher films of the 70s and 80s, Mario Bava was making his glorious gory masterpieces in Italy. Blood And Black Lace (aka Sei donne per l’assassino).

At the Haute Couture fashion studios, owner Contessa Cristina Como (Eva Bartok) and her secret lover, Max Marion (Cameron Mitchel) are having to deal with more than the usual model strops. Someone is killing the cat walk girls! A trench coated, masked killer is brutally knocking them off, and becomes more crazed when one of the girls’ diary appears and looks like it might contain some very incriminating evidence.

Everyone seems to have something to hide, from elicit affairs to drug addictions. Inspector Silvester (Thomas Reiner – looking a little too much like Mark Kermode for my liking) takes no chances and brings in five male suspects, all with links to the girls, and detains them overnight. While they are in custody however, the killer strikes again, leaving the law more perplexed than ever, and no nearer to catching the ‘sex maniac’.

A true classic, Bava uses some brilliant, fluid camera movements and use of colour and shadows to create an atmosphere that are completely absorbing, and pre-date Argento’s luscious Suspiria. A sequence focusing on a handbag containing the diary is shot so perfectly, you don’t care that nothing actually happens! The body count story line, coupled with the grisly murders are way ahead of their time, not going too far over the top, but very suspenseful and at times brutal. The famous (because it’s in all the film’s publicity) murder in the bath tub is practically movie poetry. Beautiful, if cinematic murder could be seen as such. The killer’s look is haunting enough to give Jason and Michael Myers more than a run for their money. The who done it aspect of the film is revealed with quite a bit of film left to run, so adds a new dimension to the climax, rather than the usual police procedure reveal.

The whole film looks so beautiful on the current DVD releases, a far cry from when I first saw it on a battered, cut and dubbed UK VHS back in the late 80s. It was a bargain shop release, in a cardboard slip case rather than proper clam case. Now, however the luscious colours are wonderful reproduced and the film doesn’t look like it’s nearly 50 years old. 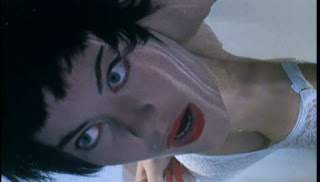 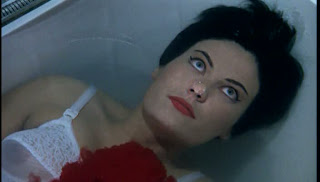 The word seminal gets bandied around a bit with some films, but Bava’s Blood And Black Lace is one that deserves the title.
8 out of 10.