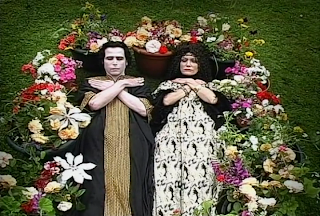 Sadly, legendary director Ken Russell has passed away. A long time favourite of mine, and genuine cause celebre of the British film industry. Never one to pander to the mainstream, his films polarized audiences more than almost any other film maker in history.
So, as a tribute, I decided to watch a film I’d had in my collection for a while, and shamefully never got round to watching. Who doesn’t have a whole load of them? It would also be Russell’s last full length film, although he did contribute a tale in the 2006 anthology ‘Trapped Ashes‘ (the interestingly titled The Girl With Golden Breasts) which I have yet to track down. 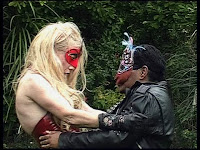 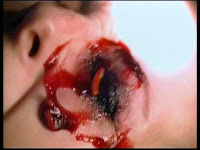 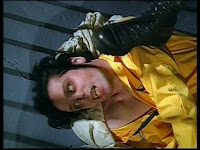 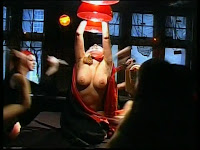 Set in Orange County, but filmed in Russell’s own back garden on what looks like a normal home camcorder, The Fall Of The Louse Of Usher tells the story of Roddy Usher (James Johnston from band Gallon Drunk) singer of a goth rock band, who kills his wife, Annabelle Lee (Emma Millions), plucking out her eye and eating it, then bricking her up with her pet dog. He is sent to a mental institution over seen by the rather odd Dr Calahari (played with amazing relish by Russell). After watching a music video of the singer, the mad doctor becomes more than a little enamoured by Usher’s sister, Madeline (Lisi  Tribble, Russell’s wife from 2001 til his death). 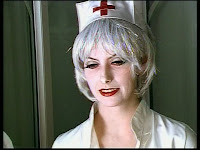 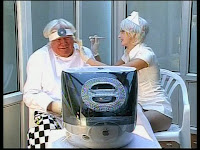 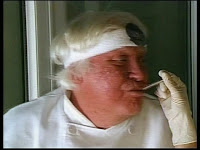 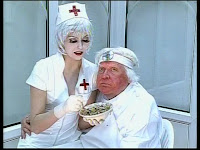 There is a party planned for the staff and inmates of the asylum, Trying to pursuade Usher to sing at the do,  Nurse Smith (Marie Findley) injects him with Viagra and putting his boner at risk with a swinging knife pendulum.
Alongside other ‘plot twists’ we have the doctor trying to sustain life at the point of death – resulting in Ernest Valdemar (Pete Mastin) being a comatose, bitter zombie. A trip to the house of Usher – actually Russell’s garden shed – and it’s ‘fall’ is beautiful staged.  A mummy, mad psychic and a gorilla all add to the fun. 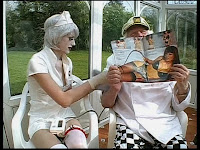 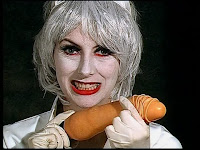 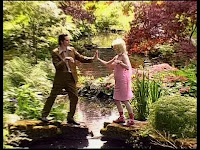 Subtitled A Gothic Tale For The 21st Century,  Usher is a mix of Poe stories and a touch of The Cabinet Of Dr Caligari, Usher is everything but boring. An opening monologue paraphrased from The Tell Tale Heart, leads in to 80 mins of low rent gore, madness and musical numbers (based on Poe’s poems) some  preposterous but hilarious dialogue, and the best use of everyday items you have seen – including one of those awful ‘Big Mouth Billy Bass’ things that were popular with the great unwashed a few years ago. DIY special effects make it feel like you’re watching your mate’s attempt at film making. It’s a credit to Russell that this rises above what could have been an awful endurance, but his fertile imagination and glorious sense of humour and fun make it a joy to watch. 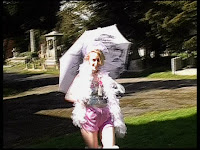 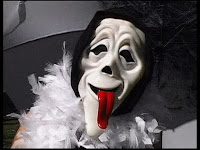 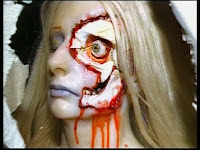 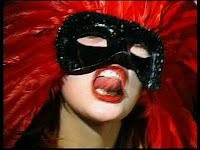 The cast and crew were all Russell’s friends and acquaintances, but they do a good job, despite all the wonky accents and lack of acting ability. Russell’s ruddy faced doctor is wonderfully manic and he looks like he’s having a load of fun, surrounded by naughty nurses, and throwing himself into his part – even if he slips out of his ‘Allo ‘Allo type German accent from time to time. Watch out for classical music wenches Mediaeval Baebes romping around in the music video early on! (Sadly, they keep their kit on). At times it reminded me of a feature length version of that advert skit in Crimes Of Passion, (you know, the one with the couple that turn into skeletons?) All fast edits and surreal images. Not saying that’s a bad thing though. 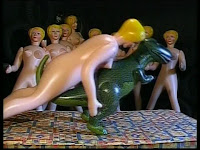 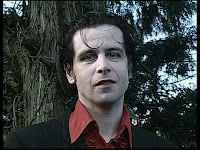 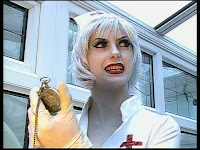 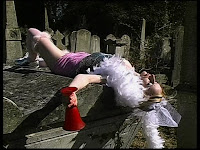 Despite it’s low budget, the film is whole lot of fun, and shows you can make use with house hold items for effects (steam irons for a defibrillator anyone?), even if it just adds to the camp amusement rather than look realistic. 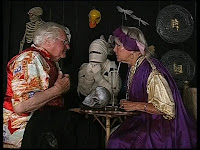 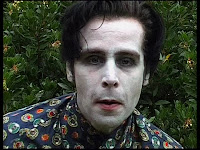 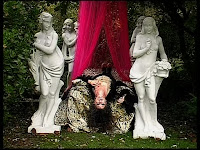 I’m sad that it took the great man’s death for me to get round to watching this, but I’m glad to it was worth the wait. A hell of a lot of fun, but it’s a shame no one would give him the finances to make something more on par with his famous works.
8 out of 10.