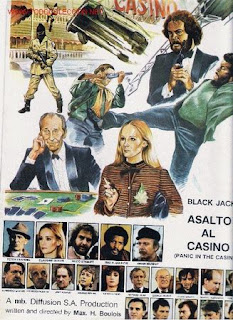 Now here’s a curiosity – a Spanish crime caper with an international cast. Panic in the Casino, (aka Black Jack or Asalto al casino) has Peter Cushing as the head of a crime syndicate plotting a casino robbery. Mexican acting legend Hugo Stiglitz (Nightmare City, Cemetery of Terror, Night of 1000 Cats and Jaws rip off Tintorera, – such a cult actor he had a character named after him in Tarantino’s Inglourious Basterds) is the police chief, and a cast that includes Claudine Auger (from Bava’s A Bay of Blood, and classic giallo The Black Belly of the Tarantula), and Brian Murphy, best known for George and Mildred.

We open with a nice Spanish guitar and a violent hijack of a security van, the robbers’ even managing to off a postman who just happens to catch their eye. This ‘action’ scene has all the skills of a higher budget but even worse acted Cliff Twemlow movie, but we’ll let that pass for now.
Next, we are in jolly old London with Cushing’s character, Sir Thomas Bedford plotting his casino job and opining the delights of “a good whiskey and a good horse!” His plan involves using a visiting singer, Dynamite Duke (played very badly by the director, Max H. Boulois) and his crew to unwittingly pose as cover for getting the money out. No one would search or suspect a musician’s equipment now would they?

Brian Murphy’s character is probably just in here for a little comic relief, and to be honest he’s the best thing in the film – he is a chancer going through the casino finding the machines that are going to pay out, in a way that the security can’t fathom, and basically, well, being George. All the mannerisms are there, his scenes could have easily been spliced in from the series! But I like Murphy, he’s fun to watch (The Devils is a great example) and it’s down to his portrayal of George in the TV shows that made them such a big hit (in my opinion)

Anyway, back to the film, Murphy is really just a MacGuffin here. The heist has gone wrong, and the police are surrounding the casino, unable to find a way out the gang decide to take the richest and most famous of the clientèle at the casino’s masquerade ball hostage. This includes Duke, dressed as Darth Vader, and an incredibly drunk guy who seems to think it’s all a joke. What the gang don’t count on is one of the hostages being the most sought after Nazi war criminal, Karl Kaufman, who makes his presence known when they are offered asylum by Israel. If this sounds all convoluted and puddled, well, believe me it is!
The film is pretty badly made, poorly edited and badly dubbed. Duke (the director remember) is so badly dubbed is he is practically indecipherable. Cushing is is usual nonchalant self, cruising through it like the pro he was. At least they let him dub his own lines. The music is awful the disco stylings of Dynamite Duke (performed, again by the director) are worse than your worst Spanish holiday nightmare (his “Brown Girl In The Ring” makes you wish for Boney M) and the incidental music doesn’t help things either. From piano power cords to a synth sound that could have come from Pigeon Street. Then we come to the slow motion fight sequence a the end, set to the phasing synthesizer sounds that would suit a Star Wars knock off rather than a drama. The production values are low, obviously all the budget went on the gunshots and explosions as they couldn’t afford a proper sign to be made for the “dressing room” in the casino, making do with a hand written one! Las Vegas have nothing to worry about from these Spanish slots.. One of the worst Eurocrime films I’ve seen, saved only by Peter Cushing and Brian Murphy. Good old Brits eh? 3 out of 10