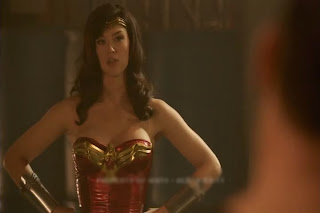 A while back, when it was announced that Wonder Woman would return to the TV screens, this time written by David E. Kelley, the man behind Ally McBeal and Boston Legal, the fans waited to pick it all apart. The first photos of the costume had people screaming heresy from the roof tops. And when eventually the TV companies decided to pass on the pilot and subsequent series, the rumours abounded that the studios had suffered a knee jerk reaction from the negative vibes they were getting from the fans of the comic.
I don’t really follow DC comics much, I rarely bought them, even Batman and Superman, and the ones I did tended to be Lobo. I was always more of a Marvel man. That said, I did watch the 70s Wonder Woman, with Lynda Carter spinning and trying desperately to keep her generous glands in that costume.
So when the new show was shit canned, the interest from everyone suddenly picked up again. Had the NBC got it wrong? Thanks to the wonderful thing called the internet, we can now see for our selves (if you don’t know where to look, you don’t deserve to see it). Much like the infamous Roger Corman version of The Fantastic Four (1994) we get to see what we weren’t meant to. (at least this time its not on 10th generation VHS)

The 2011 Wonder Woman is a much different beast to the 1975 version, we are put straight into the action with WW chasing down a baddie who is running through the streets with super human speed. It turns out he is a drug pusher for a pharmaceutical company who are creating a drug to aid athletes and boost strength. The company is lead by Veronica Cale (Elizabeth Hurley).

Wonder Woman (and her alter ego Diana Prince) is played by Adrianne Palicki, no stranger to the DC Universe, having had parts in Smallville and the TV movie of Aquaman (2007). She is now the figure head (literally) of a large company that sells WW merchandise and dolls. We sit in on a board meeting about the new action figure and Diane complains that the tits are too big (her words, not mine). The guy running the merchandise company is Henry Johns (Carl Elwes, from the Saw movies), who looks a little uncomfortable with the part.
In her homelife, Diana is lonely, with her cat Sylvester for company sitting down watching The Notebook and putting off doing her Facebook. There was someone in her past, but she chose the crime fighting over him.
To be fair, it’s not too bad, there’s plenty of action, and even with the unfinished CGI effects (the screener copy circulating has on screen notes “insert police cars”, “darken pants” etc, and visible wires pulling the actors being punched and kicked), it’s easy to see that it would have been fun to watch if not the “event tv” that they’d have liked. To be honest, there’s a lot more shows out there that look a lot worse that get serveral series.It’s also quite dark and violent in some scenes, WW even kills! You don’t see that often in superhero adaptations!
Worth tracking down if you’re interested, but you can only wonder (sigh) how the full series would have panned out if it was allowed one. 6 out of 10