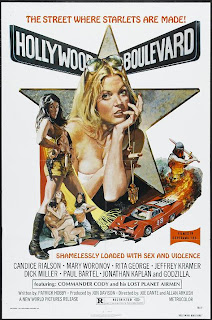 Candy Hope (Candice Rialson, of infamous talking vagina film Chatterbox) has come to Hollywood to make it as an actress. She is taken with the town, and hangs about under the famous Hollywood sign pondering her future. She drops in to agent Walter Paisley (the legendary Dick Miller – and if you don’t get the reference in his character name you have no right to be reading this blog. Or indeed, anything on the internet. You’re dead to me) who instantly advises her to change her name “that’s what we do“. “But I like my name; it’s what people call me” This simple, yet humourous exchange is the kind of quick fire comedy we’re going to get, and for the most part it works.

So, with her new moniker, Candy Wednesday is told to walk the streets, get her face out there, and be discovered. Her first job soon comes, unfortunately it’s as a getaway driver in a bank heist.

Paisley does get her work, though and sends her to Miracle Pictures (“if it’s a good picture, it’s a Miracle“) where she is put to work on the latest action caper from director Erich Von Leppe (the wonderful, much missed cult actor Paul Bartel, Eating Raoul) and she falls for the writer P.G. (Richard Doran). Things are not going well on the shoot though, as various stunt women and actress’ fall victim to ‘accidents’. Could someone have it in for them?

The star of the picture, Mary McQueen (Mary Woronov, who often appeared with Bartel and popped up in Ti West’s The House of the Devil) seems to getting more and more worked up at the pretty young starlets getting the limelight. All of which leads up to a climax under the aforementioned Hollywood sign.

Hollywood Boulevard is a heart felt spoof of the industry of low budget film making, itself made up from stock footage and clips from various New World Pictures that the directors Joe Dante and Allan Arkush could get their hands on. If there’s any action scene in the film, you can guarantee it’s from something like  The Big Doll House, Caged Heat or Death Race 2000 (Frankenstein’s car and costume is even used in newly-shot footage). All this adds to the charm of what is essentially a look behind the scenes of Roger Corman’s empire, and the Hollywood ‘dream factory’. While the laughs come thick and fast in the first half of the film, (Miller’s character being brilliant and Rialson displaying more than her psychical charms to show she should have been a star) the slap dash of styles (probably not helped by having the two directors off filming separate scenes) doesn’t quite gel, and the attempted rape sequences (once while being filmed) are more uncomfortable to watch than the much more graphic one in I Spit On Your Grave. More offensive to some may be the inclusion of a musical interlude in which a no mark hippy band (Commander Cody and The Lost Planet Airmen) play one of their ‘ditties’. Fans will rejoice in spotting the many references and nods, to films as diverse as A Hard Days Night, Robot Monster and even the smoke filled atmosphere of Mario Bava flicks. The one eyed, oafish cameraman (whose patch changes from side to side) is amusing too. 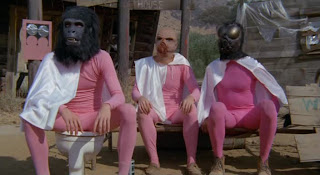 We all know what Dante did after this, but Arkush wasn’t such a directorial slouch either, going on to direct many TV shows including St Elsewhere and Heroes, but also was behind the often overlooked android romance, Heartbeeps (1981) with Andy Kaufman and The Ramones film, Rock n’ Roll High School (1979).

For the most part, it’s a fun ride with in jokes a-plenty and and some quite irreverent humour. Keep an eye open for a Godzilla character apparently played by future Oscar winner Jonathan (The Silence of the Lambs) Demme, and a party sequence whose guests include Famous Monster creator Forrest J Ackerman, Lewis (Alligator) Teague, Joe Dante himself and Forbidden Planet‘s Robby The Robot (OK you’re not going to miss him, not least because he has a great scene with Miller who is trying to sign him as an actor – “do you do pictures?“; “not recently, I don’t do nudity” ). 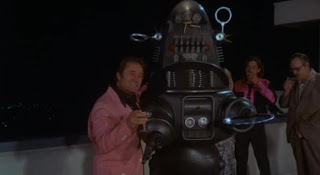 The US DVD has a great commentary track in which Dante, Arkush and producer Jon Davison discuss the various footage they plundered from other films, working for Corman in the 70s, and the usual behind the lens gossip (during the shoot, one of the actress’ threw their only prop grenade and lost it in some mud, so the grenade thrown onscreen is a rock)