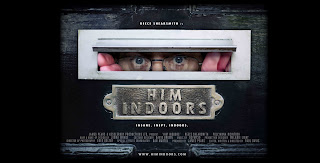 A couple of months ago, writer/director Paul Davis (who was behind the fantastic An American Werewolf In London documentary Beware The Moon) posted on Twitter (@kesslerboy) that he was looking to raise funds for a short film he was making, and set up a Sponsume page. The short would be a stepping stone and showreel for funding for his proposed full length feature previously announced, Silent Night of the Living Dead. Intrigued, I checked out the info and, liking the premise and admiring his Werewolf doc I put my money where my mouth is, and donated. 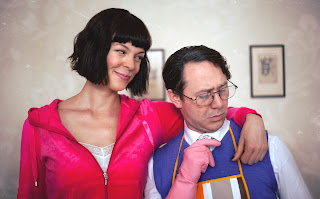 Gregory Brewster (Reece Shearsmith) is facing eviction after his mother’s passing. She cared for him, and looked after all his needs as he suffers from agoraphobia. As well as the day to day things a mother would do, she always got a steady stream of people to house for Gregory to kill. Oh, yeah that minor point. Nice boy Gregory is a serial killer. So how to kill different people when you are afraid to leave the house? Well, delivery men provide a wonderful resource. As we meet Gregory he is preparing for a dinner date with the new neighbour, Lizzie (The Woman‘s Pollyanna McIntosh). “I had planned to do Italian” he tells the bound pizza boy in front of him, but removing his helmet to reveal he is an Asian, “But it looks like we’re having Indian, instead“ 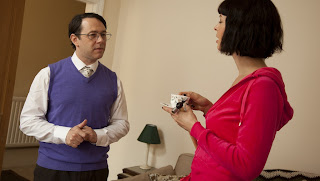 Davis’ script is witty and the humour pitch black, perfectly played by Shearsmith, who has had plenty of experience in dark, sinister yet funny characters (League of Gentlemen and Psychoville). Even at only 11mins long, the film manages to pack plenty into the narrative and and even a little peril, as Lizzie turns up at Gregory’s a day earlier than he planned, throwing his carefully orchestrated arrangements into turmoil.
Of course, mental illness problems like agoraphobia are not really a laughing matter, but Davis handles this fantastically, drawing humour from the irony of a house bound serial killer rather than going for cheap and cruel laughs. Everything is so well executed (pun intended) that you wish it was a hell of a lot longer.
I would like to think the name Brewster was chosen as a nod to the murderous old women in Arsenic and Old Lace, but even if not, there’s several things for the horror fan to look out for in the house decor, including a Rondo award and there’s an appearance (of sorts) of American Werewolf alumni David (“You made me miss“) Schofield, a fabulous actor who I have had the good fortune to have seen on stage a few times. 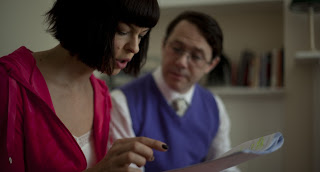 If Davis can make Silent Night of the Living Dead as enjoyable as this, then that will be an instant classic. This short is destined to be remembered fondly for many years to come, and if there’s any justice, the doors should start being thrown open for a man with a definite vision, and thankfully, the talent to back it up.
The film is making its way around the film festivals (after premiering at FrightFest in London recently) including Manchester’s Grimmfest, so keep an eye open for it and if you get the chance, DO check it out.
Oh, and pay attention to the end credits, and spot my name in there 🙂