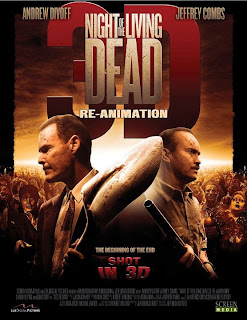 Another day, another zombie movie. In this sort of prequel to director Jeff Broadstreet’s 2006 3D remake of Night of the Living Dead, Andrew (Wishmaster) Divoff plays Gerald Tovar, jr (the character Sid Haig played in the previous film), a mortician who has inherited the family business when papa died. Trouble is, Gerald has an aversion to fire, so has not been cremating bodies like he should be, leading to a back log of corpses. One of daddy’s secrets was accepting and disposing of chemical waste from the military, and Gerald has kept this lucrative sideline, but instead of incinerating, he stores the bags with the bodies. When some waste comes in contact with the rotten pile, the dead begin to rise again, much the annoyance (at first) of Gerald. Adding to his problems are prodigal brother Harold (the wonderful Jeffrey Combs) begins sniffing around for some inheritance money. There’s a sort of sub-plot involving a Sarah Palin-type (Denise Duff) and some not too subtle humour aimed at the right wing side of American politics (as I’m British, I’ll plead ignorance of such things to stay on the safe side) but it’s the undead you want to see, and when they do appear there is some fun to be had. There’s also a bizarre drug induced sequence with the mortuary assistant, a lovely goth looking girl named DyeAnne (Robin Sydney from The Gingerbread Man) who claims to have necromantic tenancies, handyman Russell (Adam Chambers, who played a different character in 2006 film) and newly employed embalmer Cristie (Sarah Lieving) which doesn’t really add anything other than the chance to watch Robin get down to her undies and ride a corpse.

The story really has very little to do with the original George A Romero story (although it does manage to reference it when the brothers begin to talk about the ‘problem’; “Are they shamblers or sprinters?” “Slow..” “Ahh… Romero Zombies!“) which is a blessing, at least. Would we really want another re-hash of the same story? However, the zombie sub-genre is getting very tired now, and even the interesting story we have here can not save it. Nor, sadly, can the 3D effects. While it is fun to have shovels and shotguns pointed out of the  screen at you, they should embellish, not replace the enjoyment of the film. 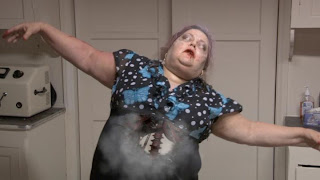 Had it not been for the two fantastic genre favourite leads, this may well have been an arduous watch. As it is, it is at least entertaining if a little drawn out. The effects range from fantastic to the annoyingly awful, with too much emphasis on CGI gore. A lot of the 3D effects were rendered in CGI too which while it works, leads the image to look a little too layered, and false rather than the natural vision 3D should provide.

It’s worth checking out, and try and watch it in 3D as you will at least get the most out of what is on offer. I’d imagine watching it ‘flat’ would drop it down a point at least.
The Blu-ray has several interesting special features (which are in 3D too, bonus!) including one on the creation of the CGI 3D effects which is worth a look). If you have the hardware to watch this in the extra dimension, it’s worth a rent certainly, or wait for the price to reduce and check it out. Personally, I manage to snag it from Amazon for £8 as a pre-order (last I checked it was still at that price). Try and avoid the anaglyph DVD version though to get the best out of the 3D.
6 out of 10