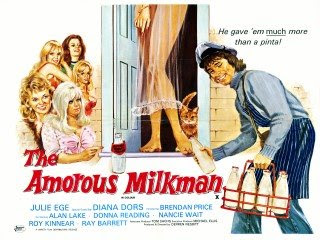 Davey (Brendan Price, Secrets of a Door to Door Salesman – 1974) is your typical down trodden milkman, living in a squalid little flat, and chatting up the bored housewives on his round. One of these, Rita (Diana Dors) later almost brings about his downfall. Which is not to say there are others who cause the hapless delivery man problems. When he meets Janice (Diana Reading, a bit part actress who had blink and you’ll miss them roles in Witchfinder General -1968 and Zeta One – 1969) she is dressed only in a very small towel, leading to plenty of “Have you seen my pussy?” type gags, and after a haphazard date – she suggests a going to see a foreign porn film –  they are inexplicably engaged.

Things get confused more for our hero when he bumps into an old friend, Sandy (Mr Diana Dors, Alan Lake) who introduces him to Diana (Julie Ege, Up Pompeii – 1971 and The Mutations – 1974). Davey is smitten, and the two hit it off, but Sandy warns him off, as she is seeing a hard nut gangster (Ray Barrett).

He then meets Margo (Nancie Wait, Au Pair Girls) who he finds himself also engaged to after a drunken quickie, interspersed bizarrely with footage of WWII fighter planes and Hitler, topped off with plenty of vomit.

Things go from bad to worse when Rita, fed up with having no attention from husband Gerald (the brilliant Bill Fraser), decides to throw herself at Davey when he drops in on his round. Gerald returns early, however, and she has to make out it was Davey who had pounced on her. Going as far as to accuse him of rape to the local police (headed by the also brilliant Roy Kinnear). It is hereon in that the tone of the film completely changes. Going from being a (rather poor to be honest) sex comedy to a fairly grimy and uncomfortable mess. His fiancées all find out about Davey’s duplicity, and of course he gets a good hiding from John, Diana’s gangster boyfriend.

The Amorous Milkman was written (from his own book), produced and directed by actor Derren Nesbitt, who is most famous as the evil SS officer in the war classic Where Eagles Dare (1968), but also appeared in Ray Cooney’s brilliant farce Not Now, Darling (1973) (which also starred Julie Ege) Mary Millington flick The Playbirds (1978) and the overlooked horror Burke and Hare – 1972). He should take the blame for all the films short comings, but since he had a spot of bother himself soon after its release (concerning knocking his then wife about) I feel I should lay off him a little. (Also, I may be meeting him in October at the Festival of Fantastic Films so don’t want to get in his bad books).

The film is really the runt of the 70s British sex comedy litter, despite having plenty of flesh on display, some genuine talent on board and one or two funny lines (a great gag has Gerald tell Rita he’s not been able to have butter since he saw Last Tango In Paris). Brendan Price is a decent enough actor but just does not have the charisma or cheeky charm of Messrs Askwith, Evans and Neil for this genre.

Watch out for brief appearances by Nesbitt himself as Davey’s milk round stand in when he is arrested (apparently he wanted Arthur English but he was unavailable), Dad’s Army star and writer of The Ghost Train Arnold Ridley as the cinema usher and Marianne Morris, star of José Ramón Larraz’s Vampyres (1975), Fred Emney (The Italian Job – 1969) with glasses rather than his trademark monocle, as the magistrate, Sam Kydd (Hammer’s The Hound of the Baskervilles – 1959, Moon Zero Two – 1969)  and Anthony Sharp – another one of those instantly recognisable faces – (House of Mortal Sin -1976, A Clockwork Orange, Die Screaming, Marianne – both 1971) as Davey’s counsel.

The US DVD is out of print (and features the tag line “If your pussy could talk!“, and no UK release has surfaced since the VHS days, although it did screen a few times on Channel 5 when they went through their phase of showing the Confessions/Adventures films.
5 out of 10