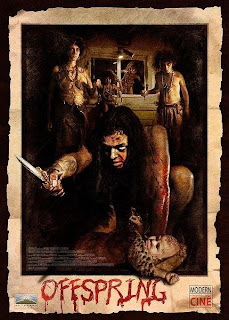 The film opens with a series of newspaper headlines over the credits chronicling the disappearance of a lighthouse keeper’s family and the subsequent murders and child abductions taking place in the Maine area for the past 100 years.We then meet David and Amy Halbard a pair of computer game programmers (never really gone into, but they have a big PC set up) who, with their baby are living a nice, peaceful life in the countryside. One night, David (Andrew Elvis Miller) sees a naked girl at the bottom of his garden. Surprised, but not overly concerned, he tells his wife (Amy Hargreaves). Their friend, Claire (Ahna Tessler) and her son, Luke (Tommy Nelson) have come to stay, as she is in the middle of messy divorce from Luke’s abusive father.

While they are there, her husband Steven (Erik Kastel) phones to say he is on his way to see them, obviously going to break all restraining orders and out to cause trouble. David gets on the phone to the police, and is told that they have no one to help them at the moment, as everyone is out looking for a murder. He should also arm himself and not let anyone in his home. Amused more than alarmed they carry on their business.

Meanwhile, the sheriff’s department (who all look too young to be cops in these kind of out of the way places) have called on a former cop, George Chandler (Art Hindle – genre veteran from films such as The Brood) to help with their investigations of a brutal slaying at a nearby house, where all the occupants were gutted. George has had a case like this before, and it is what caused him to leave the service. He is certain they are dealing with a bunch of cave dwelling feral cannibals. How very perceptive.

.
This pack have been living wild for the past hundred years, though quite why they take babies to raise as their own is not gone into. The leader of the flesh eaters is ‘The Woman’ (Pollyanna McIntosh) along side your typical wild man of the woods (Stephen Gray). This group look like the Hills Have Eyes mob if they hadn’t had a wash for ten years. In their cave, is a cow (Ed Nelson) – that’s how he’s billed. Basically, a retarded adult who is their I assume as a pet when he’s not been used for sex by the naked girl David saw in our introduction (Leigh Shannon). When she’s not casing out houses in the buff, or flagellating herself, she’s being whipped by the pack leaders.

So, to Claire’s husband, Steven. He’s on the road, and picks up a hitch hiker, who is just there really to show us what a sleazy nasty piece of work he is. Vodka bottle in one hand, breast in the other.

The idyllic peace of the family get together is shattered however, when the pack pay them a visit, taking the two women to their cave, and leaving young Luke to try and take the baby to safety. Steven’s car is ambushed by them when he turns up, and he foolishly flees the police when they find out about the restraining order. I think he had bigger things to worry about!

The whole gang end up in the cave, and the brutality really begins, with Steven relishing his soon to be ex wife’s suffering and humiliation at the hands (and mouths) of the clan.

Offspring is based on Jack Kelchum’s novel, (itself a sequel to his book “Off Season”). Considering his involvement in the film (he wrote the screenplay as well as having a bit part), you’d think he’d have fleshed the characters out a bit more. The film is just under 80mins, and while it’s full of gore (and is brutal in parts) we just don’t care enough about the people in peril. Pollyanna McIntosh is incredibly believable as ‘the woman’, but was much better in the ‘sequel’ – more on that in a moment. I did think the inclusion of a scene of ‘dialogue’ between the two main cannibals was a little long considering we couldn’t understand what they were saying.
The young actor playing Luke, is brilliant, which is good seeing as a big part of the climax depends on him.
The direction (by Andrew van den Houten who was only 30 when he made it) is a little all over the place, there seems to be no thought put into camera angles in some scenes, and in some the focus is a little off. At times, especially during the interaction between the police, I thought I was watching a 1970s grindhouse film. I’m guessing a big chunk of the already low budget went on the gore make up, which is very icky and well done. Watchable, but disappointing.
4 out of 10 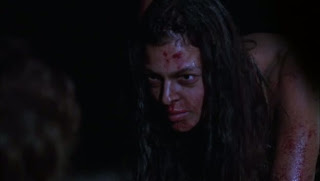 Now, what’s puzzling me is why, since Lucky McKee’s The Woman is doing big things at he moment, this film seems to have been buried. I can only assume they know it isn’t as good as it should be and want to distance themselves. My first thought was it was a rights issue, different distributors, that sort of thing. Strange then that both films are made by the studio Modernciné. Andrew van den Houten is listed as a producer on The Woman. Almost NO reviews (except mine), or publicity for the film mentioned Offspring, other than it also being a Ketchum novel/film. There’s no mention in the publicity of Pollyanna McIntosh coming back playing the same character. I’m just wondering why. I am more surprised that Offspring hasn’t made a re-appearance on DVD (you can pick the UK one up quite cheap, the US one – put out under the “Ghost House Underground label has a ton of extras), you know how they usually cash in. Both films have a misogynist in the centre of it all, is that a recurring theme in Ketchum’s work? I must admit I don’t read as much as I should, so maybe I should check his books out. Oh, and in the opening of The Woman, she is bathing a stomach wound. At the end of Offspring, the wound is inflicted on the other side of her stomach. Sorry, being Mr Pedantic.