We open on a misty graveyard, and a funeral being held. The overly camp minister is quoting the Wizard of Oz to the mourners, and as they leave – now in daylight and not at all misty – he bids them “try and have a nice day!“. One mourner goes back in to pay her last respects, only she doesn’t, she curses the dead woman and for that, she is dragged into the coffin by the re-animated corpse within. She is then put, still screaming into the fires of the incinerator. 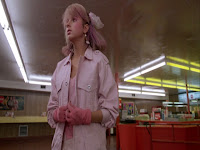 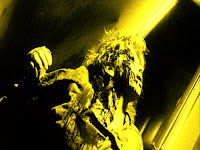 Only this turns out to be a film at the drive in. Not impressed with her date’s wandering hands, a young (very 80s looking) girl goes to get some popcorn. She finds the concession stand deserted. Helping herself, she heads back to the car, only to be confronted with all manor of corpses, mangled and mutilated faces and worse – an 80s hair metal band playing amongst the popcorn! 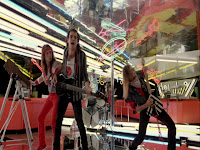 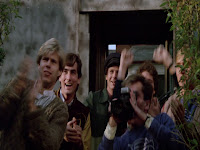 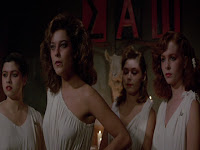 Double bluff – this is merely a music video being watched by young students. All pre-credits.
After this somewhat shaky start, the film settles into more standard frat house fare, with three girls pledging to get into their chosen sorority, and having to do gross out initiations. Add to this the boys pulling Porky’s type pranks, mainly involving getting the girls nude and filming them.
The main initiation is going to be at a party being held at the long closed frat house where a youngster was killed twenty years previous, his grave even being in the front garden of the place. 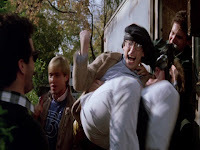 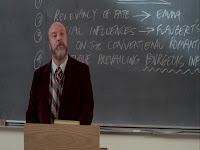 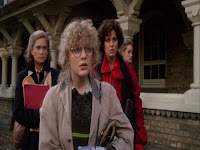 Sadly, you have to wait nearly and hour before the titular party and the ensuing body count, but the build up (when the film is not goofing off) is not too bad, with a couple of killings by assailants unseen, and some more bluffs.All topped off with a demonic possession. What’s not to like?
Killer Party is one of the many slasher type student films from the 80s, only this has a slightly different pedigree since it was allegedly started in 1978 but then closed down when going over budget, only to be finished in 1984, then shelved for another two years. Apparently the more gory sequences were cut from the film before release, but to be honest, it doesn’t really miss them as the level of shocks/gore left in balance out the (admittedly amusing at times) comedy moments.While not going for an out and out spoof, the film walks the line between being tense and titter-some. 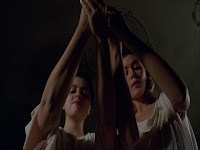 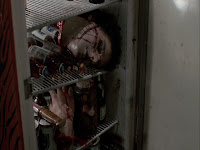 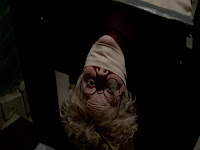 The band in the opening sequence, White Sister, were a hotly tipped band at the time – I even saw them as a support band once – and while the song used isn’t their best (instead, check out ‘Dancing On Midnight’ from their ‘Fashion By Passion’ album that appeared in Halloween 5) it is by no means terrible. There’s much worse music in this film. There’s appearances from a couple of actors worth spotting, Paul Bartel (Eating Raoul) is one of the faculty in the college, Jason Warren plays his usual ‘fat kid who doesn’t get any’ like he did in the two Screwballs films, and Ralph Seymour, previously seen in Just Before Dawn and Ghoulies has one of the main male parts.
It’s directed by William Fruet, who also made ‘Death Weekend’ (1976) and ‘Spasms’ (1983) before heading into TV work on stuff like Goosebumps,  War of the Worlds and Poltergeist – The Legacy. 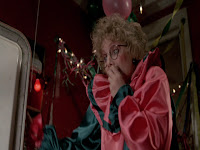 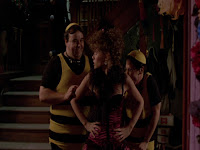 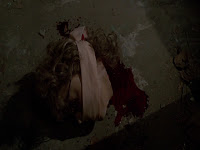 The film has just been released by the ‘Warner Archive’ on their (quite expensive) ‘made to order DVD-R’ range, and actually looks very good. While it’s no worse than all the other college kids get slaughtered films out there, but no better either.
6 out of 10