Finally got round to watching these, and I’m really sorry it took so long! First up, Tucker and Dale Vs Evil, What a classic! 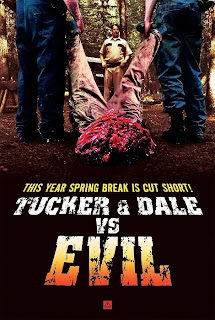 A group of obnoxious college kids go on spring break in the woods, when they come across two hillbillies, Tucker and Dale, (Tyler Labine and Alan Tudyk) and naturally think they are inbred killers. In fact, the two friends are just two nice buddies. One of the girls slips into the lake while skinny dipping and the boys rescue her, shouting to the kids “We have your friend!” causing the group to run off and assume the girl has been kidnapped.Far from the truth, but as the prejudices against Tucker and Dale build up and the misunderstandings ensue, the college kids end up in all kinds of dead. The twist on the out in the woods horror convention is brilliant, and there’s enough laugh out loud moments for this to be a natural successor to Shaun of the Dead. Labine plays Dale in the style of a less annoying Jack Black, and is likeable, and Jesse Mosse is completely obnoxious as Chad, the lead college kid with a chip on his shoulder about hillbillies (his parents were attacked by them before he was born). A brilliant death by wood chipper moment, Tucker: “You okay?”
The film has won all kinds of festival awards and deserves a much wider audience. Hopefully it will do well when it gets released properly later this year. 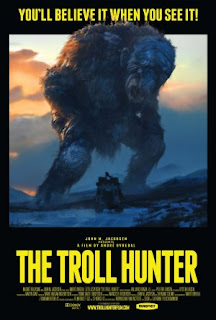 The Troll Hunter is a Norwegian film, made in the hand held POV mock documentary style, that is still going strong all these years after The Blair Witch Project. There haven’t been many famous genre films from Norway (Lake of the Dead (1958) is a hidden classic, and recent films like Dead Snow showed potential) However this one seems to have caught the attention of more people, and rightfully so, to be honest. It follows a group of students who are making a documentary about a supposed bear poacher. When following him one night they are startled to find him running out of the woods, screaming “troll!!” After taking refuge with him, they are invited along to document his work, as a hunter of trolls. Now, considering this is all a pseudo documentary you would expect all the action to off camera or at least hidden by the shaky POV? Not here, we get to see the trolls and I’ll be honest, they look brilliant. This low budget (I assume) effort from a country not known for its cinematic output puts the effects in some of the major blockbusters to shame. It is maybe, a little too long at 105m, but it’s enthralling enough to keep your interest. I do urge you to see it before the inevitable US remake though…  It’s actually the second mockumentary/POV style film I’ve enjoyed in recent months, the other being The Tunnel (2011) a brilliant Austrailian film that you can read about in my review at Starburst Magazine
Keep your eyes peeled…