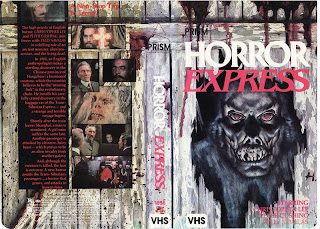 Christopher Lee and Peter Cushing headline this Spanish made flick from 1973, and despite all the odds, it’s a belter!
Professor Saxton (Lee) has found the fossilised remains of what he believes to be ‘the missing link’ in the evolution. Even before he has manage to get it aboard the Trans-Siberian Express, a thief has been found dead in the station, his eyes as white as a blind man and blood dripping from his extremities. A strange monk (Alberto De Mendoza, doing a passable impression of Paul Naschy) at the station, who is travelling with a Count and Countess, believes it to be the work of Satan, and when he attempts to draw a cross on Saxton’s crate in chalk, nothing happens, proving his point (to him at least). Dr Wells (Cushing) is an old acquaintance of Saxton, although you get the feeling early on there is some rivalry and no love lost between them. Curious as to what the fossil is, Wells bribes the baggage handler to discreetly drill a hole in the crate so he can have a peek inside. When he does this, he is attacked and killed by the beast, which then goes missing, the body of the dead baggage man replacing it in the crate.
Wells and his assistant, Miss Jones (Alice Reinheart) perform an autopsy on the body and find that, as well as the blank eyes, the brain has been ‘wiped clean’ of all its memories, which is obviously what you can tell when you find a perfectly smooth brain. He comes to the conclusion the creature is taking the memories and knowledge from its victims. A perfectly obvious deduction, especially from someone in 1906, when this is based!
The creature is gunned down by the on board inspector, (of police, not ticket inspector) but rather than just dying, it transfers its powers and memories to the inspector. While everyone is breathing a sigh of relief that it is dead, Saxton and Wells have teamed up to examine the remains. They remove its eye, and after taking a sample of liquid from it, discover images embedded into the liquid – of the last thing it saw, the inspector, but also of prehistoric creatures, and then more startling – the earth from outer space! The creature is in fact, an alien form that was using the human body as a host.
Telly Savales turns up as a over zealous Cosssak, Captain Kazan and is promptly killed off in less than 15mins of screen time. The final showdown involves the monk becoming the host to the creature, and all its victims coming back to life as white eyed zombies. So, what’s not to like then?
Considering this was a low budget European movie you’d expect it to be really bad, right? No, how wrong can you be! There is so much to enjoy here, Cushing and Lee are at their top form, and play well off each other. The music is fantastically atmospheric, there’s plenty of gore, more than you’d expect and certainly not one for eye-phobics (all you Fulci haters out there). The biggest plus is the cracking dialogue, there are some intentional laugh out loud lines that you’d just not expect. The story isn’t too bad, robbing as it does from “Who Goes There?” which was also the basis for “The Thing From Another World” (and its remake). Considering this film seemed to be on UKTV almost every couple of months, I’m surprised it isn’t as well revered. Its reputation has maybe been sullied by the fact it’s in the public domain; you can download it legally from The Internet Archive but it’s definitely worth another look if you haven’t seen it for years. 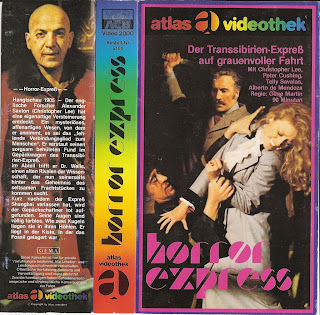 Some wonderful dialogue :
Inspector: Is it true you’re a doctor?
Wells: ask me when I’ve finished dinner
Inspector: its urgent…
Wells: what are the symptoms?
Inspector: he’s dead.
Wells: Miss Jones, I need your assistance
Miss Jones: yes, well at your age I’m not surprised
Wells: with an autopsy!
Miss Jones: oh well, that’s different

Countess: oh yes, England. Queen Victoria, crumpets, Shakespeare.
Saxton: I admire Poland, madam. I believe there is a bond between our two countries

Countess: my husband, the Count says that in the fifteenth century your King Henry betrayed us to the Russians
Saxton: I hope that you and your husband, madam will accept my profoundest apologies.

Inspector (to Sexton and Wells after the creature is loose in an unknown body): the two of you together, that is fine.. but what if one of you is the monster?
Wells: monster? We’re British, don’t you know! 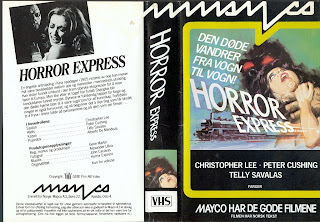 If you have never seen it, I urge you to change that as soon as possible, you won’t regret it. If you have, re-watch it and enjoy!
8 out of 10