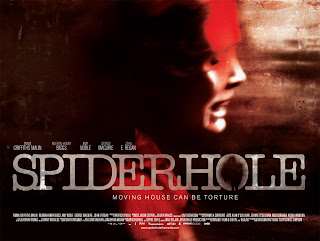 A group of four art students decide they are going to live the complete bohemian lifestyle and find a squat in London. Free housing, no ties.. plenty of drugs and party is the plan.  The four, Molly (Emma Griffiths Malin), Luke (Reuben-Henry Biggs), Zoe (Amy Nolan) and Toby (George Maguire) seem your typical student types, high ideals and low morals.
When they break into a big old house they think they have it made. Toby is the ‘brains’ behind the move, and sets about securing the house for themselves, before the group settle down for the night amongst the creaking floor boards and spider webs. When they awake Molly feels ill, and the group feel like they’ve been asleep for hours, but since they see no light from outside (the place is still boarded up) they assume it’s still early. When, however, they come to check the doors, they find they have been secured by steel shutters and they have no way out! The windows are similarly blocked. Add to this all their mobile phones and tools have gone missing, and they naturally begin to panic. 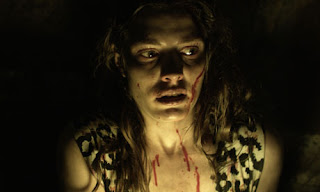 What starts as a haunted house type story (or at least I hoped it would be) soon turns into “Hostel” torture porn territory, as each of the rather obnoxious crew go missing. The antagonist (John E Regan) even has a slight Tobin Bell look at times – or was that just me?
The problem I had with the film really was the students. They deserved everything they got. I’ve never approved of this free loading squatters rights type attitude, if it’s out of necessity it may be understandable, but to deliberately do it is unforgivable. I won’t go and get on my soapbox about it, though. The reasons for they things happening are not gone into enough too, you have to be a quick reader with good eyes to get it, but with a short (a little over 80mins) running time I guess small details got left out.
On the plus side, the acting isn’t too bad (it’s not the actors fault the students are so annoying) and the sound design is brilliant. There’s a brilliant moody bass rumble throughout and the film isn’t marred by being full of “trendy” music. In fact the end credits run over an original folk song by Sophie Coyle, so well done for that!
Considering that it’s the first feature by writer/director Daniel Simpson, it’s well made, fairly well paced, and watchable. Certainly worth a look and better than the low budget shot on video stuff coming out of the States.
5 out of 10.