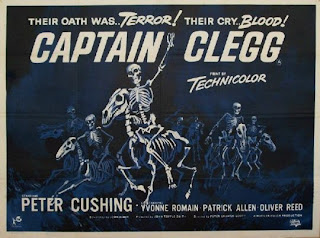 It’s 1176, on a remote desert island a pirate ship leaves a man tied to a stake, his ears slit and his tongue cut out. A sign above his head reads “thus perish all who betray Captain Clegg” 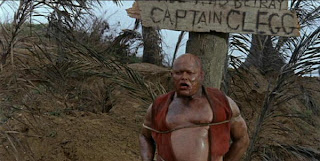 After the credits, we move to 1792, and the area of Dymchurch on the Romney Marshes, over looking the seas to France, where many smugglers bring their bounty of wine and brandy to out-wit the hefty taxation laws. A little like nipping over to Dover on the weekend ferries, then. There is something more to fear in this area though, as many have told of the Marsh Phantoms who strike fear into those unfortunate enough to see them. Dymchurch is also the last resting place of the notorious pirate Captain Clegg, whose grave states he was hanged at Rye.

Our introduction to the village is a startling one, Old Tom Ketch (Sydney Bromley, a familiar face – he was one of the tramps slaughtered in An American Werewolf In London), a local is out on the moors when he suddenly surrounded by some hideous spectres on skeletal horseback. Terrified, he falls into a lake and drowns.

The following day, while the village preacher, Reverend Dr Blyss (Peter Cushing, perfect as always) is giving his sermon, the men of the Royal Crown are marching into town to check on reports of smuggling, and fiddling the King out of the taxes! (oh how times haven’t changed, eh?) Led by Captain Collier (Patrick Allen, owner of one of the most famous voices in the UK) and backed up by a Navy boss (David Lodge, another familiar face from UK comedies) they set about searching the local tavern ran by Mr Rash (Martin Benson) and then the ever busy coffin makers, Jeremiah Mipps (played by the ever reliable Michael Ripper, and in role much bigger than he usually had). The men fail to find any trace of illicit wine or brandy, even when using their prototype sniffer dog, in the shape of the Mulatto* (Milton Reid, a brilliant character actor who would later appear in Bond films and genre wise he was in The Blood On Satan’s Claw and Dr Phibes Rises Again), the stocky bald man seen left to die in the pre-credits sequence. It seems he was rescued by Collier and his men as they were on Clegg’s trail, and has been used by them since, as a way of finding hidden wine, and a source of amusement later for the horrendous soldiers. 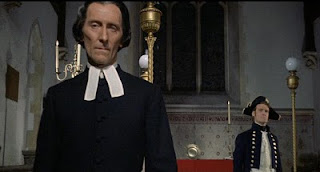 What they failed to find was a maze of connecting corridors and tunnels that covered up that the villagers, were in fact, smuggling and funding the poor of the village with the proceeds. The Rev Bliss being in charge of the whole operation. A minor sub plot involving the ward of Rash, Imogene (Yvonne Romain) and Harry, the local hunk (Oliver Reed) serves its purpose but to go into detail would probably reveal too much of the plot.
The film was released in America as “Night Creatures” (and it is this title that is on the DVD release) because apparently that was the name of the film Hammer had sold to the US distributor (they had planned to make a version of Richard Matherson’s I Am Legend – later filmed as The Last Man On Earth, and The Omega Man – but the UK censors promised that it would have been banned) So, they took the Russell Thorndike story of Dr Syn and the Scarecrow of Romney Marsh and made the film. The Syn character was changed to Blyss since Disney were making their own version of the story (which is why it might sound familiar). 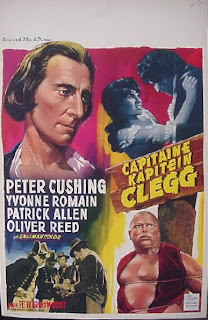 The story is fairly predictable, but still a whole load of fun and the acting is first class all round, remember this is long before Oliver Reed had turned into a caricature. Cushing is at his best as the Vicar hiding a secret with a wicked grin, and Ripper excels in his expanded role. The film is a brilliant rip-roaring adventure with a few spooky and atmospheric moments with the phantoms on the marsh and the creepy scarecrow but it’s not technically horror. Even bearing that it mind it’s a brilliant movie and one well worth checking out!

The DVD looks fantastic and the colours are stunning, far better than you’d expect for its age, and certainly better than than the last time I saw it on TV from what I recall. A mention must be made too for the brilliant score by Don Banks, giving the legendary James Bernard a run for his money.
8 out of 10. 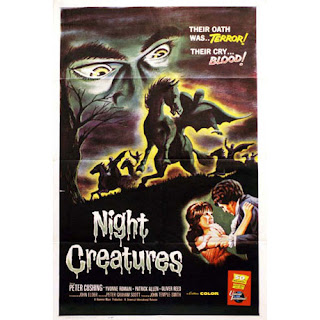 (* A Mulatto is a term used to describe the offspring of mixed race coupling in the bad old slave days, not a particularly nice expression, but it is how the character is named in the book and film, so I left it. No offence was meant or intended)