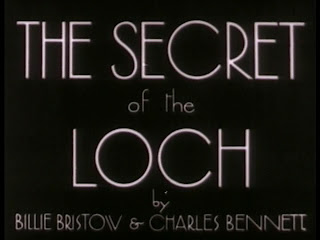 Now here’s a little rare curiosity. In the early 30s the opening of a new road past Loch Ness brought lots of passing traffic to this once quiet (and no doubt idyllic) are of Scotland. It’s also around this time the famous “surgeon’s photo” of Nessie, the beast believed to live in the loch, appeared. So, hot on the heels of this, and the recently released hit King Kong (1933) came this, the very first Loch Ness Monster movie!
The film opens with a terrified Scot running into the local ale house “Boys! Boys! ‘Av seen it! It’s no a sight for mortal eyes!” All the locals, including a very manic Professor Heggie (Seymour Hicks) believe there’s something out in the loch, and all accept it. Until newspapers appear, from that London, with headlines of “mass hallucination” and “something from hell itself” Heggie decides to go to meet with his academic equals and put his case forward that there is prehistoric beastie in the depths of the loch. 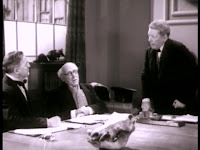 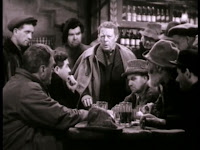 The meeting is attended by a motley crew of strange looking eggheads with their loose teeth rattled when Heggie proclaims that he will prove the existence of a living dinosaur. He is rail roaded out of the meeting, but not without drawing the attention of a reporter from the Daily Sun, Jimmy Andrews (Frederick Andrews) who, smelling a story, follows the professor back north, with a request from one of the workers in his news room to “find out what they wear under their kilts!”  When he gets there, he finds he’s not alone, all of Fleet Street’s ‘finest’ have set up camp in the local inn, all after the exclusive on the mad professor and his monster. Jimmy decides to go the extra mile, and breaks into the professor’s house. You see, the modern hacks (ahem) haven’t invented underhand and criminal activity! When he finds himself in the bedroom of Angela (Nancy O’ Neal), Heggie’s granddaughter, rather than call the police or indeed, shoot him, he manages to sweet talk her into trusting him to get close to the old professor. 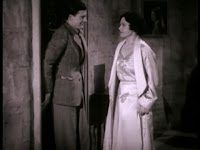 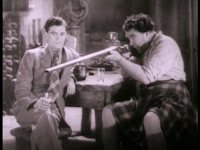 He also gets close to Heggie’s burly helper, Angus (Gibson Gowland – a familiar face from some of the Universal Monster films), due to his wearing of a McKnockie tartan tie (he borrowed it from a girl in the office!) and over a few drams – “What’s this whisky distilled from? Pepper?” Angus agrees also to try and help Jimmy get his story, since he is convinced that the professor is right about the monster. 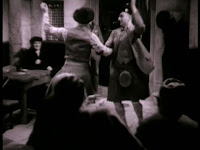 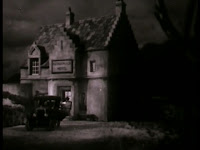 This really isn’t a horror film, or a drama or thriller. It’s more comedy, and for it’s age a quite good one, there’s plenty of sight gags and quips to keep you smiling. Until the final 10 minutes underwater, and with the “monster” – it’s no spoiler really to tell you it’s just an iguana back projected onto footage of what looks like one of those little divers you put in your fish tank. But, never the less, it’s enjoyable and a great example of British film making from the ‘good old days’ There was a time when you could find films like this on TV schedules all the time. Usually in the mid-week afternoon slot, or Saturday afternoon on BBC2 while Grandstand was on the other side. All we have now is idiots competing to see who can cook the ponciest meal or sell off their tat on a car boot sale. Oh well…. now, where’s my troosers….
5 out of 10

Spoiler Alert!!! the monster in all it’s glory….. 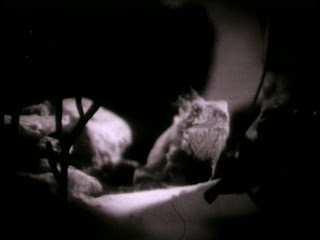