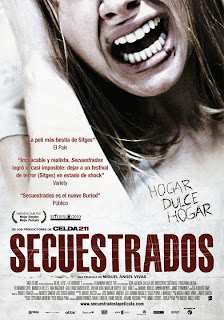 A few years ago I came across a short Portuguese  film called I’ll See You In My Dreams (2003). It was a great little film about a man having to protect his little village from zombies. It’s director, Miguel Angel Vivas showed promise. So I approached Kidnapped with the view to enjoying it. What followed was almost 80mins of brutal carnage.

A family are just moving into their new luxury home, in a private complex. Their peace is shattered when three balaclava wearing East Europeans force their way in. The father is taken out to withdraw as much as possible on all the families credit cards, while the mother and daughter are left with the remaining two men. Then we are subjected to some of the most horrendous, unflinching, relentless and graphic cinema I’ve seen in a while. It’s made all the more horrific because the situation is one that anybody could face. Do we know who the next person to knock on the door would be? Would we be prepared for it?

The film is incredibly well made, and I can’t fault Vivas on that count. There’s a bold move using split screen techniques to show us both sides of the ‘action’ (I don’t recall it being used this much since Wicked, Wicked (1971) – which famously used it all the way through), and long takes which allows for lots of camera movement and little cut-aways, a technique Hitchcock used on Rope (1948).

Home invasion movies are not uncommon, but usually there is some reason given, or back story, or perish the thought, even a happy ending, but not here. By the end of it all I was left with a very sour taste and very disturbed. Probably the effect that was wanted? In this day and age, the down beat ending is nothing new, but to be SO relentless and downbeat is fairly unique. Like I say, it’s an incredibly well made movie, but by no stretch of the imagination is it enjoyable.
Approach with extreme caution.
7 out of 10.