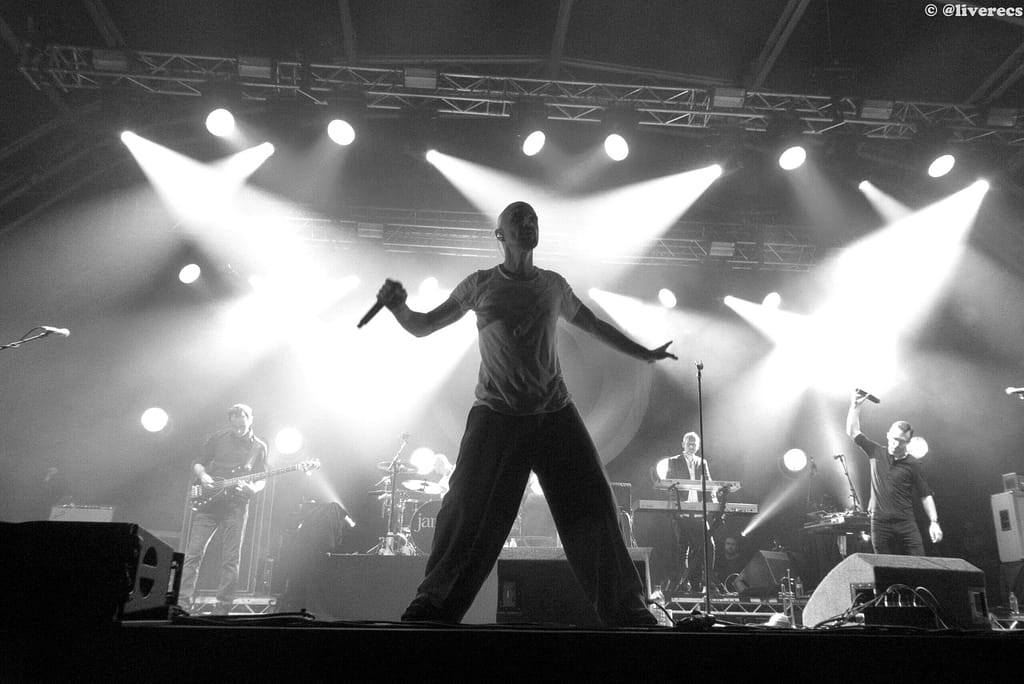 It’s only been three years since James last played at Manchester’s bespoke open air amphitheatre in the heart of the historic Castlefield area, but judging by the welcome they received from the fans on a damp and grey night, that was too long.

Before the main attraction, however, were the warm-ups. Opening the proceedings was Dave Keenan, a one-man-and-his-guitar act who surprised those who chose an early entry over a few more pints in the overpriced local pubs with a short set of rather good tunes. It’s difficult for this kind of performer at the best of times, let alone on large stage such as this and with such a partisan crowd. But the likeable young Irish lad Keenan received more than just polite applause and, while maybe not making a massive impression, got things off to a mellow start.

At that last Castlefield show in 2014, James brought along then-unsigned band Blossoms to open the show. They are headlining the same stage the following night. So it’s fair to say that James has been picking some good acts for their support slots. One of the most recent has become favourites of many of the band’s fans too: The Slow Readers Club. Another Manchester band, they have been earning their stripes for a while, which now appears to be paying off with their fanbase expanding beyond their hometown.

Not only has the crowd grown for the four-piece, but the stage confidence and presence is ever-improving and evolving. The show focuses on the pick of the first two releases, and each track is welcome like an old friend and lyrics are sung along with the clearly delighted band. The fact there are more than a handful of Slow Readers Club T-shirts in the audience shows they have little to prove, but they don’t rest on their laurels and push to win over the few casual James fans who only ever appear at these big events. It’s great to see a band relishing the opportunities that come their way, and it’s even sweeter when they deserve them.

So with the crowd suitably warmed up, and the sky getting darker – not just with the onset of the night, but with the rain that almost inevitably makes an appearance whenever bands play outside. James’ trumpet maestro Andy Diagram gets things going with a fanfare of looped notes, and a sing-song for the left-leaning faction of the sold out Bowl. The rest of the band head out to the stage and launch into Walk Like You, one of the standout tracks from 2014’s La Petite Mort album. Most bands given the blanket misnomer ‘indie’ would attempt to make a big impression with a bouncy, anthemic singalong song to open with, but that just isn’t James’ style. They do, however, break out older fan favourites soon after and the whole place erupts in euphoria.

By third song, Catapult (from their latest album Girl at the End of the World), frontman Tim Booth is stood on the barrier singing into the faces of the fans (and their iPhones, much to his constant chagrin), this gets the ‘3 songs and out’ official photographers scurrying for the best position to get their ‘money shot’ before their ushered out of the security pit.

Uncharacteristically, following another latest album track (the wonderful Dear John, the songwriter’s way of dumping a lover), we get a run of four classics that culminates in a joyous Sometimes, in which Booth removes his ear monitor to take in the 8,000 voices singing the chorus back at him.

The problem with open air shows is that people tend to make the most of the refreshment and social aspect of the day and get a little carried away. They also attract what can only be described as the knobhead element. When a beer bottle hurtles across the stage toward the end of the song, Booth attempts to quell the situation with humour, telling the perpetrator(s) definitely not to throw anything at bassist Jim Glennie, as “He’s harder than me”. Unfortunately, the humour didn’t work and once again, he spots an airborne bottle. Holding the show up, he orders the security to remove the person. Sadly, after the show, there would be several reports of scuffles and altercations in areas of the crowd. Some people shouldn’t be let out, really.

A little riled, the band continue with another tradition for them: playing a new song that no-one knows. It’s something hardly any group would do on a high-profile show such as this, but James is not just any band. Currently entitled Busted, it has all the hallmarks of being a cracking tune, with a memorable chorus and catchy hook. Perhaps put off by the earlier unpleasantness or just on a whim, Tim decides not to perform the second planned work-in-progress tune and instead go straight into La Petite Mort’s Interrogation.

Slowing things down after a crowd-pleasing Born of Frustration, Jim and Tim take centre stage for a poignant rendition of the rarely performed Stripmining, with Saul Davis adding some luscious violin towards the end of the song. Another welcome return to the set came with the beautiful Of Monsters and Heroes and Men, adding to the songs that no doubt brought a few lumps to throats.

For the past year or so of shows, James has been closing their set with the haunting Attention, a standout track on the latest album, and elevated to another level live. However, this time rather than take their bows, Dave Bayton-Power launches into a familiar drum pattern. “So we had to do this one, huh?” Tim perhaps addressing some mainstream public outcry from the last time they played the venue from people who only know the band’s biggest hit. And Sit Down goes down a storm; despite it being a rather ragged rendition, the masses belt out the lyrics – some even getting them right. As Tim once again makes his way to perch on the barrier (this time aided by this writer’s firm grip), he’s mobbed by girls young enough to be his granddaughter (and who were convinced the chorus included the line “Sit down in symphony”). The mauling and lyric-mangling don’t put him off, though, and he spends the entire song on the barrier and face-first in the crowd.

Returning to the stage after a very quick encore break, and with curfew time approaching, we’re given the recent viral hit Nothing But Love, and back-to-back classics Come Home and Laid – the latter giving some lucky fans a chance to dance like no one’s watching on stage with the band. Sadly, this time, those chosen seem to have not learnt the first rule of a James stage invasion – put your damn phone down – and Tim has to lower or move a few that are attempting to take selfies rather than be lost in the moment.

It’s hard to explain the ragged attraction of a James show to people who are used to polished and over-rehearsed slick performances or acts that rely on backing tapes, but it’s that knife-edge of excitement of knowing that a song the band have played a million times could fall apart any second that keeps the diehards coming back. It’s called live music; you should try it sometime.