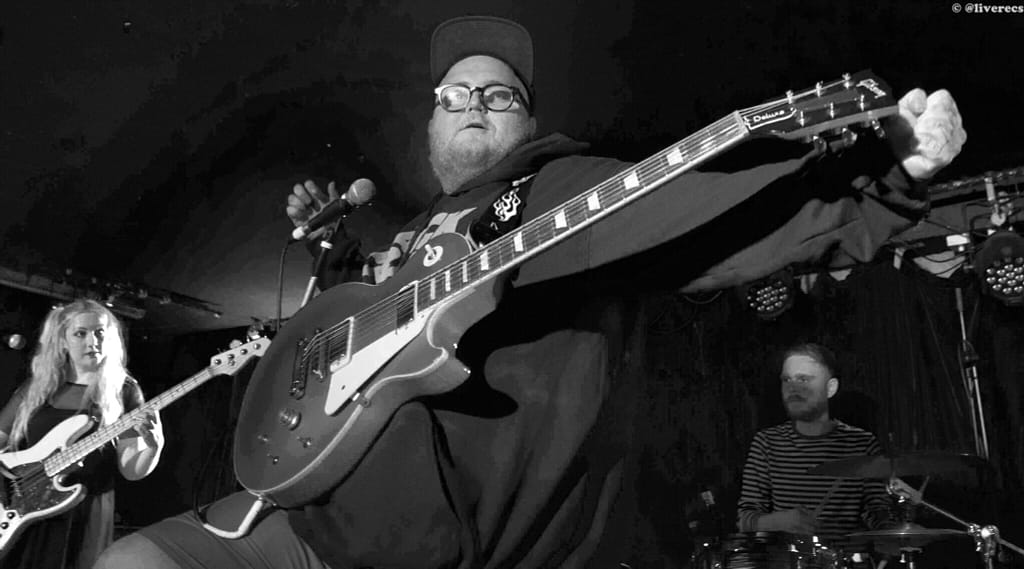 Topping the bill at the brilliantly curated and marvellously organised Sonder Festival, which took place over three days in an uncharacteristically sunny Manchester at the start of July, were local (well, they’re from Leigh, which is near enough) wonders The Lottery Winners. They’ve been paying their dues for a little while, but the last year or so has seen them find not only their own audience after many support tour slots with high profile acts such as The Wonder Stuff, Heaton and Abbott, and The Charlatans, but they were also signed to Warner Brothers for a record deal. Which is something frontman Thom Rylance mentions during the show. Joking, as he often does, he tells us that they signed the contract over a year ago and haven’t done anything since. A white lie, we’re sure as a debut album is in the works.

As the four-piece hit the stage, we’re reminded what an odd bunch they are. Thom is not your regular frontman. Rotund, bespectacled, heavily tattooed and dressed in baseball cap, nylon shorts, white socks and sandals you’d be forgiven for thinking he’s just walked on to test the mics. He could also pass off as the younger, funnier, brother of Peter Kay as he is constantly cracking jokes and making self-deprecating remarks. But once the music starts, and he begins to sing, no-one is laughing. The guy has a voice that would turn all four heads on a popular Saturday night TV show and the band has stunningly catchy tunes that you can’t help but dance to.

The rest of the band are just as quirky, from impish bassist Katie Lloyd, who has an infectious smile and provides bouncy backup vocals, guitarist Robert Lally, who could have easily come straight from a Static X tribute band to drummer Joe Singleton, who stands out as looking the most ‘normal’ of the bunch. The chemistry within the band is as infectious as the music; we just can’t help being drawn into their world.

Thom knows how to work a crowd, too. Although it’s with a knowing wink that he goes through the stadium rock postures and patter. Imagine Freddie Mercury with a broad Leigh accent and a pin in the pomposity.

It’s difficult not to be swept along with the fun and everyone leaves with a smile on their face, but it’s the music that sticks with you longer. Tracks like I Know and Pillows deserve to be massive mainstream hits; each song is a delicious slice of pop-rock and easily gives any of the ‘darlings of the indie press’ bands a run for their money. We can’t wait to hear the album and watch the certain meteoric rise of the group from there. This time next year, you’ll all be Lottery Winners.