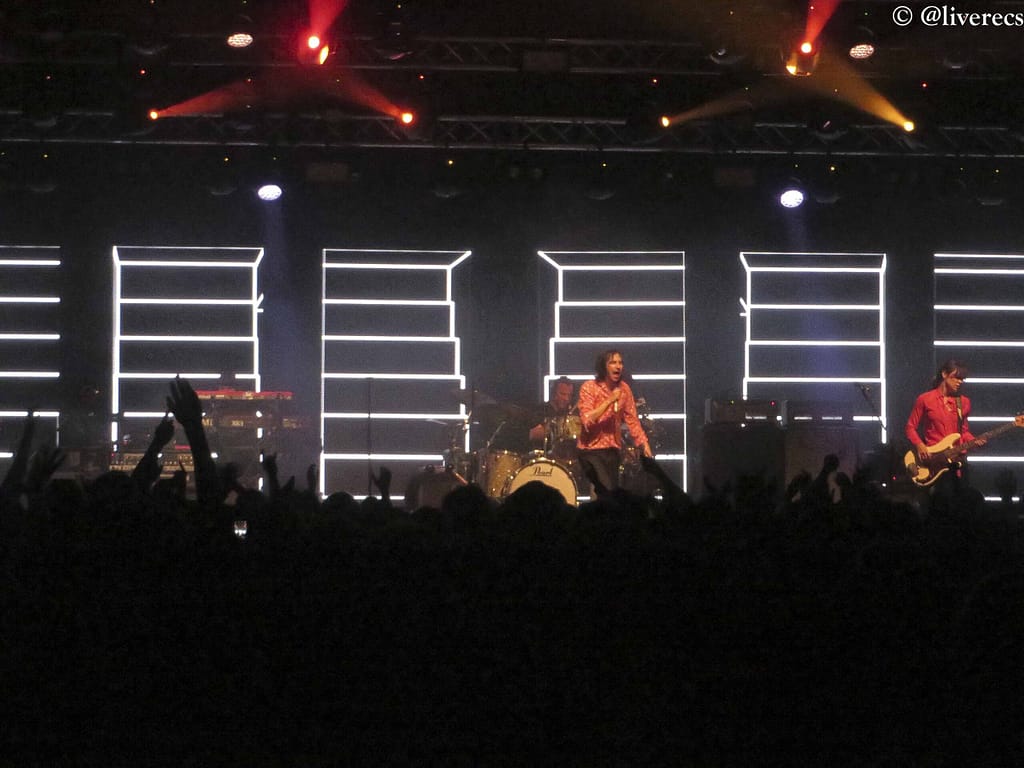 It was a long time coming, and with some legal wrangles threatening to throw a spanner in the works at one point, by the time The British Sound Project kicked off, the people of Manchester (well, technically Salford) and the surrounding areas were certainly ready for a good time.

With two separate stages, the second playing host to a hoard of up-and-coming independent bands; it was an audacious venture held in a cavernous venue, but somehow, it worked.

Kicking proceedings off on the main stage were local boys Sittin Pretty, whose blues-tinged swagger warmed the growing crowd and won over some new fans. While the band seemed a little lost on the large stage – perhaps from nerves – and vocalist Conor Wilde appeared to be a bit more restrained than he would normally be when he can get right up into the face of the audience. Nevertheless, the new tracks the band showcased shone and they certainly warmed the early doors crowd.

Eliza and the Bear had some work to do to follow the Bolton boys, but they manage to keep the attention of those who’d come along to see the bigger acts. It’s a testament to the longevity of Dodgy that they win back those who’d dwindled outside to smoke or had gone to check out the second room. Some of the audience may not have been old enough to remember when they were a curly-headed bouncy three-piece, but with familiar tunes such as Staying out for the Summer and In a Room, they definitely got the enormous warehouse warmed up, and put plenty of smiles on faces.

With the evening drawing on, it was time to bring the big guns out. Former Radio X breakfast DJ Tim Cocker was wheeled out as the compare for the remaining bands, and the crowd erupted when Reverend and the Makers were beckoned onto the stage. From the moment they arrived, they acted as though it was a headline show. It may have taken one or two songs for the majority of the crowd to warm to frontman Jon McClure’s cocksure antics, but it’s not too long before the whole arena is bouncing.

There’s a worry following the triumph of Reverend that the more sedate stylings of Badly Drawn Boy may lead to a slump in attention and energy. And while one man and a guitar may not be the most visually or sonically exciting, the strength of Damon Gough’s songs shone through. From the opening number, Born in the UK (dedicated to Dennis and Lois, the infamous New York couple who are like a magnet for British bands, and are in the building tonight), it’s clear we have a fairly respectful crowd who know their music. Ending his set at the keyboard, Damon pays tribute to some of the people who have passed away this year; particularly those whose death ‘slipped under the radar’. So it’s an incredibly touching moment when he plays an emotional Wonderful Life, the massive hit for Black – singer Colin Vearncombe having tragically left us in January.

Although that may have been a poignant end to the set, it didn’t bring people down; the night was drawing on, and that just meant only two main acts remain.

It was a kind of homecoming for Shaun Ryder, fronting his ‘other’ band Black Grape tonight rather than the more famous Happy Mondays. He’s welcomed like a hero as he shuffles on stage and bursts into In the Name of the Father alongside fellow vocalist Kermit. The rejoicing abates somewhat as the set continues and it’s clear Ryder hasn’t so much as rehearsed for the show, never mind talked to his bandmates beforehand. He spends valuable set time getting reacquainted with them, which is a nice ‘behind the scenes’ moment to see for fans, but for those ready to get their dancing moves on, it’s a little rude. He also loses a large portion of the crowd by being unable to perform any part of the songs without referring to his teleprompter. It’s the largest karaoke night in town. Only without that one good singer who hits it out of the park. There’s enough there for people to enjoy, though, so they certainly didn’t put a damper of the evening.

Despite having two months off touring following a stage fall earlier in the year, Primal Scream hit the stage at the ungodly hour of 12:30. Sure, the venue is used to putting all-night raves on and the like, but for concert-going punters (especially those of a certain age who make up the majority of the crowd), it could be a slight gamble. Would there be a mass exodus as people go for the elusive last tram into town or scramble for the even rarer taxis? That doesn’t seem to be the case, fortunately as the band and their massive wall of lights manage to keep the audience bouncing and dancing along right until the end. A triumphant Rocks gives the crowd their second wind while they are sent home to the sounds of Come Together.

With a great line-up – we didn’t get a chance to check out too much on the smaller stage, sadly – and judging from the smiles on the sweaty faces of those who left to be greeting by cold, bitter, Manchester rain, the inaugural British Sound Project was a success. There were a few niggles – the ‘token’ system the venue has in place for the bars was a little annoying – not to mention, very pricey. Depending on which bar you went to, it could cost £4 for a bottle, or the same for a full can. The lairy ‘Madchester’ bunch were out in bucket-hatted force, but the stealthy security (you really did only see them when they were needed) handled any of them whose alcohol intake had gotten the better of them and were making a nuisance of themselves; something that was very good to see, without any heavy handiness. It’ll be very interesting to see what the promoters will cook up for next year.