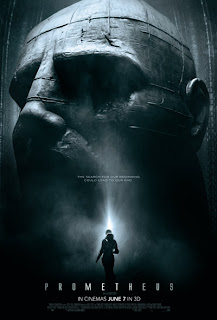 It’s 2089 and archaeologists Elizabeth Shaw (Noomi Rapace) and Charlie Holloway (Logan Marshall-Green) discover cave paintings in the Isle of Skye that are 35,000 years old and are similar to other drawings and carvings from across the world and across all history, all showing a large man pointing to the same set of stars.
This is obviously an invitation, at least it is to Shaw, and she hopes of meeting mankind’s makers (despite the fact she believes in God), they set off on a space voyage on the good ship Prometheus, funded by ailing trillionaire Peter Weyland, head of Weyland Corporation. Among the crew are scientists, an android David (Micheal Fassbender) and Weyland executive Meredith Vickers (Charlize Theron). Despite it being a trip to explore Shaw’s theory, Vickers makes it clear that it’s her companies money, and she calls the shots.
It’s not long until they are exploring the caves of the planet the cave drawings have led them to, and things begin to get a little out of hand. 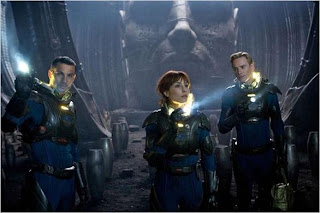 Long and eagerly awaited by many, this return to the world of Sci-Fi for Ridley Scott has probably been set up for failure by the hopes and dreams of the many Alien fans who, when it was hinted at that Scott would be returning to the Alien-verse and specifically the “Space Jockey” we see in his 1979 masterpiece, had so much they wanted answered and delved into.
It is to Scott’s credit that he has taken a different route with the story here. There are similarities, and yes, we do get to understand a little more of the Space Jockey race, but it’s clear that this film doesn’t necessarily take place in the same uncharted area that the Nostromo is sent to investigate. While the space ship and indeed, the Space Jockeys are all the same it is more likely the wreckage Dallas and his crew explore is a different one, which should be clear from the events at the end of the film. The focus on DNA is a big clue into the way this one goes.. 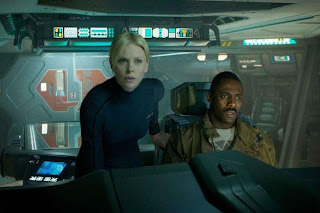 That is not to say there are not some answers, and indeed, a sequel to Prometheus could easily work as the missing link, and lead straight into Alien.
So while Prometheus might not be all we wanted, or expected, it is a well made, entertaining film. It just doesn’t have much in the way of tension or threat. Even in the scenes with alien life forms (which are more proto-xenomorths and face huggers rather than the ones we know and love) there is a lack of real drama, which is a shame. It is certainly not a body count film, but if you go along wanting a fairly intelligent piece of Sci-Fi then you should enjoy it, despite some plot holes and clunky dialogue. 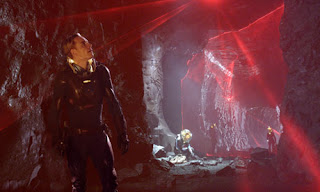 Full marks, however go to Micheal Fassbender (who keeps his knob in his pants this time, unlike his brilliant turn in Shame) as David, who watches the sleeping crew’s dreams and memorises lines from Lawrence Of Arabia in the spare time he has while the ship travels the galaxy (an inspired choice of clip to show, too – with an appearance from the recently deceased Harry Fowler). David is a character that you are waiting all the way through to betray the crew and “do an Ash” – indeed, at some points it seems he’s doing just that, but it could easily be interpreted that he was in fact, naively, just learning and experimenting.
Guy Pearce, so brilliant in Memento (2000) is a little wasted here, under a ton of make up as the aged Peter Weyland, head of the company. The make up job here isn’t the best either, more like Grandpa in The Texas Chain Saw Massacre (1974) the Dick Smith’s tour de force in Little Big Man (1970). 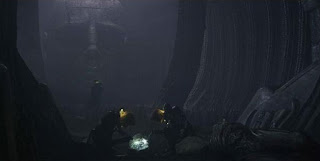 One thing that I was very disappointed in was the 3D. Now, I’m a complete advocate of the format. Yes, it’s a gimmick, but used right and well it CAN enhance the film (just watch Hugo for proof). However, Scott seems to make little allowance for it here, despite filming ‘native’ with 3D cameras. The enormous alien structures and tunnels should look amazing, yet they are quite often just OK, which is a shame. There are many dark scenes in the film, but you shouldn’t worry too much about losing anything from them with the usual drop in light levels necessary with the 3D process, though as it all seemed OK to me.

Not a complete waste of time, but I doubt it will top any “best” lists, I just wanted to enjoy it so much more.
7 out of 10.