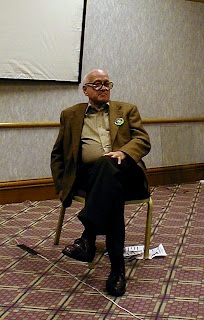 It was with great sadness that I learned of the death of film producer Richard Gordon. While not a house hold name, his films have been enjoyed by many for years. I have been lucky enough to meet Richard several times over the years, as he was a regular visitor to the Manchester Festival of Fantastic Films, where he was due to appear this year but his health wouldn’t allow it. Star of two of his films, Robin Askwith was there and spoke very highly of Richard, and they kept in touch over the years too.
For those who still can’t place him, Richard produced and executive produced (often uncredited) such films as Fiend Without A Face (1958), (no one can forget the final 10mins of this with the stop motion brains complete with spinal cord tails and antenna!) The Haunted Strangler (aka Grip Of The Strangler 1958), Corridors of Blood (1958), First Man Into Space (1959) and later on Tower Of Evil (1972) and Horror Hospital (1973) both with Robin Askwith. He bowed out of the industry with Norman J. Warren’s Inseminoid (1981)

Worth checking out is the brilliant book The Horror Hits of Richard Gordon which is basically a book long conversation between author Tom Weaver and Richard, going through each of his famous horror films. It’s a great read (I have a copy) and fascinating. There’s also a foreword by Mr Askwith! What’s more to want?

It is always sad to say goodbye to someone whose work you’ve admired and enjoyed for so long, but at least we have that work as his legacy. Mr Gordon, we salute you, rest in peace.