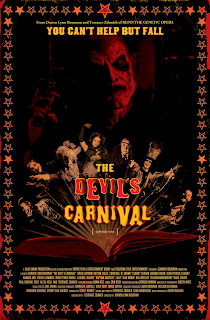 Three characters, all whom have recently died in unfortunate circumstances all find themselves in the titular carnival, run, as the name suggests, by Lucifer himself. Suicide victim, John (Sean Patrick Flannery), driven to his act by the loss of his son, Miss Merrywood (Briana Evigan) is a thief and was gunned down  in her trailer park home by police, Tamara (Jessica Lowndes) was killed by her abusive boyfriend.

They each arrive with an envelope containing a ticket for entrance to the carnival, and along the way each meet with one of the sideshow entertainers and fall for the temptations laid out for them in a series of interpretations of Aesop’s Fables. The Devil himself (the film’s writer, Terence Zdunich) is paying close attention all the time. 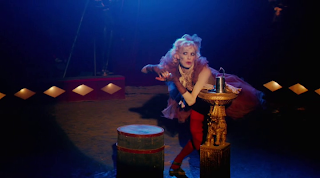 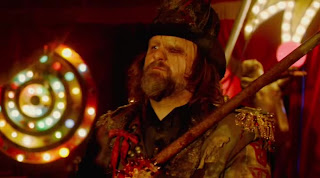 From the director (Darren Lynn Bousman) and team that brought us Repo – The Genetic Opera (2008), this is yet again another musical piece, which manages to fit quite a lot into its swift 55 minute running time. The  colourful cyberpunk burlesque look of this particular carnival is a joy to watch, peppered, as it is, with lots of familiar faces, if you can recognise them under the impressive makeup. Cult musician Emilie Autumn, Bill Moseley, Spy Kids‘ Alexa Vega, Slipknot’s clown, Shawn Crahan and Five Finger Death Punch’s Ivan Moody all put in a appearance, alongside the legendary Paul Sorvino as a doll making God.

The morality tales are not laboured so that it becomes preachy; this is Hell, after all, but are enough to keep the interest and provide a backdrop for the musical set pieces.

While the songs may not be as instantly catchy as those in Repo, they are serviceable and are worth dipping back into where they will soon burrow into your mind. It is the visuals, however, that will strike you straight away, and despite being shot on one set, give the impression of a much larger space, and the sleazy carnie atmosphere drips from the screen.

As yet, there is no UK release on the cards, which is a shame, hopefully that will be corrected at some point this year. The film has been on a roadshow style tour in the US, with the director and writer doing Q & A sessions, and general circus atmosphere. The US DVD can be purchased from the website. A sequel, subtitled The Librarian is in development.
8 out of 10