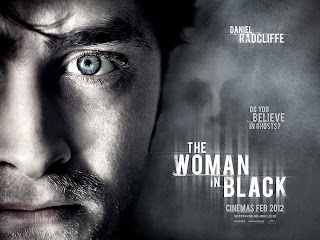 So one of the most eagerly awaited horror films of the year is upon us. The Woman In Black, Hammer Film’s version of the Susan Hill novel (also a very successful and superb stage play and infamous TV adaptation). Directed by James Watkins (Eden Lake) from a Jane (Kick Ass) Goldman screenplay. I have posted before about my concerns as to what changes will be made with the story, and after thinking about it, a straight filmed version of the book or play would have probably left audiences very cold. As it is, the embellishments Goldman has made to the story are mostly for the better. Considering this version has the backing of Hill (after she apparently hated the Nigel Kneale scripted TV version for changing little things like the dog’s sex and the main characters name from Kipps to Kidd) either shows her marketing savvy or she has mellowed a great deal since 1989).
The big stumbling block for many will be the casting of Daniel Radcliffe as the main role or Arthur Kipps, a widower with a small child. I have to admit it is a little stretch to accept this. He still looks very young himself, and although I’ve never really been a Harry Potter fan, it is how we all see him. (I do regret not going to see him in Equus as I love that play – and the film – and would have been interesting to see him try to tackle something so challenging). I will concede that he won me over. There wasn’t really any point during the film where he “pulled me out of the action” as it were. In fact, there is a whole stretch in the house where there is no dialogue, and only Radcliffe. Fair play to him, the boy did good.
The predicted “jumps” and spooky bits plastered all over the trailers still work in the context of the film, and some actually better. Trailer spoilers are a big bug bear for me with films like this, as these moments work not because they are just sudden noises (the good old “Lewton bus”) but because they are built up to, you know they are coming, and it’s the tension of waiting for them that makes them all the more enjoyable. Surely I’m not the only one who sits there thinking “make sure you don’t jump” because I don’t want the stranger next to me to think I’m soft! This film delivers these jumps successfully on more then one occasion. So, bravo to all involved.
The set design and locations are superb. It was wonderful to see versions of the famous “Angel of Sorrow” angels at either side of  the mausoleum of Samuel Daily’s young son. (My cemetery geek-ness never takes time off). Sound design is spot on, nothing too showy and brash, and the visual effects are not over the top either. A good old fashioned ghost story. It should carry a warning for those who have Victorian doll phobias though!

I won’t go on anymore, as I’m planning on including some thoughts into my March piece for Starburst Magazine (which, by the way will be back in the shops while stocks last – subscribe to guarantee you don’t miss an issue) and don’t want to include spoilers or anything here.
Final thoughts – this could have been a disaster, and I’m sure there are many who hoped it would be, but it is actually a well made, genuinely scary film. I wasn’t over keen on the end, but anyone who knows the material will know that that will always be a contentious issue. At least it didn’t go for a Hollywood “everything is right with the world” spin..  Make sure you catch it if you get the chance… 8 out of 10.