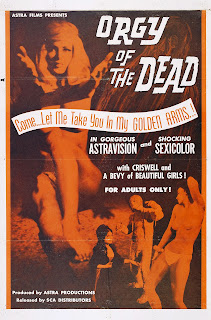 “I am Criswell. For years, I have told the almost unbelievable, related the unreal and showed it to be more. Than a fact. Now I tell a tale of the threshold people, so astounding that some of you may faint. This is a story of those in the twilight time. Once human, now monsters, in a void between the living and the dead. Monsters to be pitied, monsters to be despised. A night with the ghouls, the ghouls reborn from the innermost depths. Of the world.“
Almost every word is given the wrong emphasis. That, of course, is the joy of watching The Amazing Criswell (and indeed almost any ‘performer’ who worked with Wood).

Bob and Shirley (William Bates and Pat Barrington) are driving at night trying to find some inspiration for Bob’s next horror story, or at least it is night in some shots, when they crash (denoted by screeching tires and a spinning freeze frame). They then find a misty studio graveyard watched over by ‘The Emperor’ (Criswell) and his minions, a Morticia/Vampira-a-like (Fawn Silver), and a group of dancing topless girls. Or ghouls. A mummy and a wolfman are there too, almost like C3PO and R2D2, passing comments over the (sadly) rather dull dancing. You know, I never thought I’d get bored watching a steady parade of jiggling and bouncing boobs (Barrington herself appears as one). One of them is whipped while dressed as a big cat (“a pussycat is born to be whipped“) , another has a Bettie Page in the jungle type wig (and comes complete with stock footage rattlesnakes) , and one blonde just basically flops her knockers about. All fun for a few minutes, but it goes on… and on. Until sunrise, of course when they they all turn to skeletal dust.

More convoluted dialogue from Criswell breaks up the boobage, but it’s still far too long. If they’d have made it under an hour it would have been quite enjoyable in a so bad it’s good sort of way, but at almost 90mins it drags…

The DVD quality though, is just brilliant. No low budget bad film like this deserves to look this good! One for the fans of Wood (the writer/director, not as in ‘getting wood’ – because despite the titillation there’s no chance of that) and bad films in general, but probably best ‘enjoyed’ in small chunks, or in the background of your groovy beatnik party. As with ‘bad movies’ it’s impossible to rate ‘fairly’.. I enjoyed it, though, for all it’s ‘charms’
5 out of 10