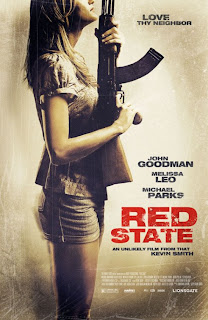 Wed 14th September, and the legend that is Kevin Smith – he of Clerks, Mallrats, Dogma, Chasing Amy, and er.. Jersey Girl is in town to show us his new film. Silent Bob is in the his-house!
OK, so I’ll try and reel in my fanboy glee at finally getting to see the man in person, and get to the event.
The film, Red State has been toured by Kevin exclusively for the past few months in the States, since he famously, and quite controversially,  told the gathering would be distributors at Sundance what he was going to do. Add to this his lack of “press screenings” (meaning someone who is going to tell you whether to pay to see a film or not seeing the film for nothing) and Kevin has not made any many new friends in the press/distribution companies. Does he care? Not one jot. As it turns out, he probably made the exact right decision, because in the hands of a big company, I don’t think Red State would have stood a chance. It would have been buried as a straight to DVD flick. Why? Is it that bad? No, quite the opposite. It’s a relentless, take no prisoners film. I’m reluctant to even go into too much detail about plot, etc.. because I think that would take the experience of seeing it away from the viewer. Unless you have had your head buried in the sand and haven’t heard anything about the film, all I will say is it revolves around three smalltown school friends who want to get laid (so far, so Kevin) and a religious group, The Five Points Church, led by Abin Cooper (Michael Parks) who are the sort of organisation that protest at gay kid’s funerals. Parks is superb. As is all the cast, and Kevin quite rightly sings the praises of all involved in his post film talk. If there is any justice (and lets be honest, we know there isn’t) Parks and a number of other cast members (even John Goodman) should get at least a nomination nod come awards time, and if Parks is not up for an Oscar, then it would be the only negative thing to come from the way Kevin is distributing the film.

Kevin himself calls this a horror film, on paper you wouldn’t think it was. However, in Abin Cooper, Kevin has created the ultimate monster. A man who believes the downright nasty, evil things he does and says are true, righteous and worse still, moral.
The film becomes a tense, nerve racking drama almost as soon as you begin to get settled into the characters, and it’s not too long before you realise that as well as using their First Amendment Rights to free speech, the Cooper clan are also stock piling on the Second. Of the 90min running time, you are on the edge of your seat for the majority, and completely absorbed in this Waco style situation. If you want laughs, watch the trailer. All the ‘jokes’ you’re going to get are there. In the context of the film, they, as Kevin says, give you a very brief moment to breath before being dragged back to that seat edge. Also, do yourself a favour, and see the film in a CINEMA. It has been released on the Video On Demand market in the States for a limited period before good old Lionsgate release the DVD, and as such, it’s all over the place if you know where to look. But do yourself the favour this time, and wait for it on the big screen, the film will be back in UK cinemas at the end of September (minus Kevin, but please don’t let that put you off). I’m pretty sure I’ll be going back for more. 10 out of 10.

After the film screening, @That Kevin Smith (his Twitter name) made his appearance. Drawing our attention immediately to the monk style bald patch on the top of his head and expressing his knowledge of Factory Records and Tony Wilson (even giving a a little of Love Will Tear Us Apart before his a brief ‘Manchester, England…’)  Going straight into a monologue about the film, it’s influences and the actors. Kevin loves these performances. He is proud of them. He has every right to be. Sadly, I can’t go into detail about a lot of what he said, as there would be a lot of spoilers for the film. 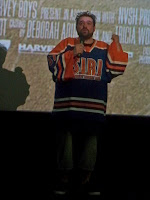 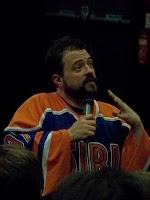 Kevin tells us that this is his ‘grown up’ film, and he’s right. Also, despite this being his second religion based satire he has his own beliefs, which no doubt confounds the zealots even more. The stories of his infiltration of the demonstration outside a screening of Dogma are well documented, and Red State did not go unnoticed by these plaque waving idiots either, and we hear how he got a bunch of people to make their own signs to wave back at the Phelps Westboro Baptist Church organisation who had come out to protest at this ‘fag enabler’, A tag Kevin actually liked. 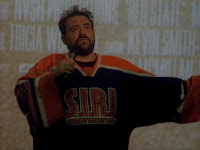 We got a great story about his wife, Jen Schwalbach getting a role in the film (cos he wants to keep getting laid) despite her – A. being an atheist playing a religious nut, B. being totally against firearms and having to shoot a gun, and C. not really being an actress. She is really, though. And a very good one at that. We got a great story about the original ending to the film, thankfully it was re-written but it still would have been something amazing! There was a question from the audience asking what was the first horror film that scared Kevin. The answer, probably unsurprisingly for anyone who knows Kevin’s films was Jaws. He was even scared of toilets after, “because there’s water down there.” A priceless night, and a splendid film. Roll on February and the Jay and Silent Bob Get Old UK Tour…