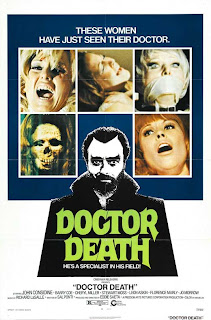 Laura Sanders (Jo Morrow) is dying from injuries sustained in an (unseen) car crash, caused by her husband, Fred (Barry Coe). Wracked by grief, a probably more than a little remorse, he begs her to come back “I’ll come back” a voice over (presumably in his head) tells him. As he wakes in bed later on, he finds Laura there, stroking his leg. Delighted, he moves in to hold her and her faces turns to a skeleton. Roll the credits….. 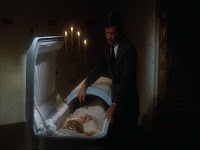 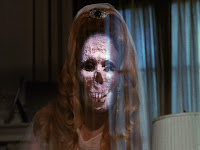 Not too disturbed by this vision, he becomes obsessed with finding a way to bring his dead love back. Visiting a fake seance, ‘The society of the dead’ a group of hooded figures who have brought a wild looking old man’s wife back – as bone and dust, granted, but he has her back. He finally stumbles on a newspaper ad promising “control your own re-incarnation”. Tana (Florence Marly), an old mystic trying desperately to keep her looks, takes him to a theatre to see a performance by Doctor Death (John Considine), who promises to bring the body of a beautiful girl he has on stage back to life.A member of the audience, brought up to prove she’s dead. This is a brilliant cameo from the former Stooge, Moe Howard, still recognisable, and in his last role. “would you confirm she is dead” “why certainly” he says in true Stooge fashion. Not taking the Doctor’s stethoscope, he chooses to place his ear to the girls breast “I couldn’t feel.. er hear a thing!” 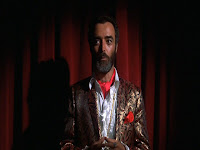 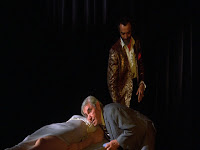 Another body is brought on stage, that of a burns victim, living every day in agony and mutilated. The Doctor proposes to end her suffering, and using his methods, transplant her soul into the dead girl, and thus give her life. Being the flamboyant Doc he is, he does in true Grand Guignol cutting her in half in a magician’s way, aided by his not at all glamorous assistant, the bulking Thor (Leon Askin) who looks like an undead version of Paul (Hi De Hi) Shane. 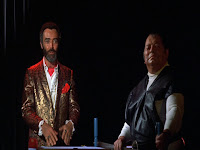 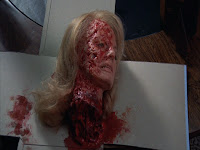 Horrified, Fred wants nothing to do with the Doc, until his need for his wife becomes too much. He goes back to see the Doc and, helpfully, he tells Fred the origin of his power in a sepia tinted flashback. $50,000 later, the Doc is attempting to give Laura life. Only the soul he tries to give won’t go. “I don’t know what happened – This has never happened to me before!” Bet you say that to all the girls.
The bad Doctor then becomes obsessed with getting a soul to take to Laura’s body, even against Fred’s wishes.
“Enter that body!!” 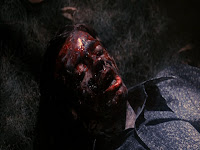 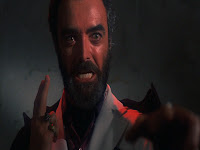 An obscure little curiosity from the early 70s, Doctor Death has a 70s TV movie feel to it, in it’s music and look, but pumps up the gore considerably. The acting is solid, and there are some nice set pieces and visual flourishes. The DVD print is of superb quality, if only all 70s flicks looked this good! Towards the end of the film, the Doc wears a polar neck and looks the spitting image of a classic Action Man. Coincidently, the animated Doc on the DVD menu has eagle eyes. It’s a fun film, but not a lost classic.
6 out of 10.