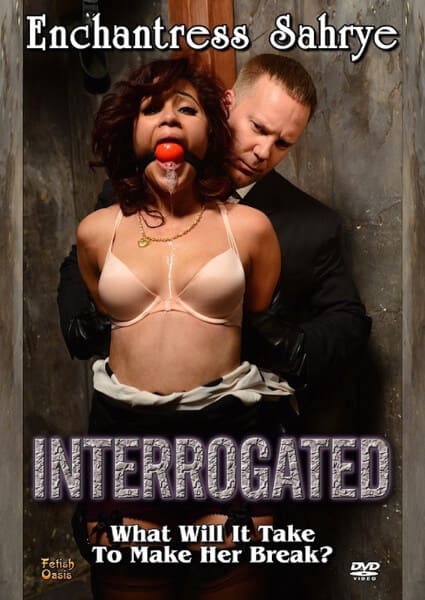 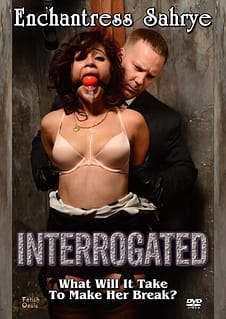 Now this is something of an odd one for even me, as it’s less a film and more an ‘adult entertainment’ video. Still, I’m a man of the world (well, I finally have a passport) and open minded, so why not give it a shot?
Enchantress Sahrye is apparently well known in the world of fetish and BDSM (if you don’t know what it is, you shouldn’t really look it up). Here, she plays a woman who has been kidnapped and accused of being a spy and financial terrorist. As such, she is bound, gagged and ‘tortured’ by a burly bloke (Brian Pierce) while being verbally abused and interrogated by an unseen captor (actually director and veteran of this kind of film, M. R. Stewart). That’s pretty much the plot, and through the seventy-five minute running time the poor woman is subjected to some of the most terrible mishandling and physical harm one could imagine short of mutilation.

Of course, it’s all consensual in filmmaking terms, but for someone not ‘into’ the scene, it’s difficult and often deeply unpleasant to watch. That it’s so effective is surely a credit to Ms Sahrye and the filmmakers. It’s very simply shot, with a single POV camera, which is not too invasive but certainly allows the viewer an up-close-and-all-too-personal view of the ‘action’. The quality and lighting are fairly low, almost home movie style, giving it a found footage/snuff feel, but if you’re watching it expecting Citizen Kane, you’re really missing the point.

Should this be your cup of coco, then it will tick all your boxes (or slap your feet, whichever is the most appropriate), but if one is expecting a ‘straight up’ dirty movie, it’s best to move along and avoid. This is a specialist film and, while certainly adult and containing some nudity, is definitely not porn. It’s not for the mainstream or easily upset, but if you’re thinking of dabbling in a little spanking or tie-up role play, then it would probably give you some ideas. That, or put you off for life.
You can order Enchantress Sahrye Interrogated from the fetishoasis website, available in several formats, including discreet download. No strings (or ropes) attached.
6 out of 10
Share on Facebook
Tweet