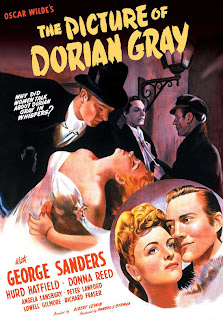 Hollywood’s first attempt at Oscar Wilde’s classic story of a man who wishes to never grow old, and leads such a depraved life of debauchery and callousness, while his portrait takes the strain of his excesses.
Basil Hallward (Lowell Gilmore) is a talented painter, just putting the finishing touches to his latest masterpiece, his sitter is Dorian (Hurd Hatfield). Lord Henry Wotton (George Sanders) is Basil’s friend and takes a shine to the young Dorian and begins to fill his head with hedonistic ideas and fears of growing old. “this painting will always be beautiful, but you however, will grow old” he warns him. Dorian doesn’t like this at all, and wishes that he would never age. Little would he know that his wish would come true. 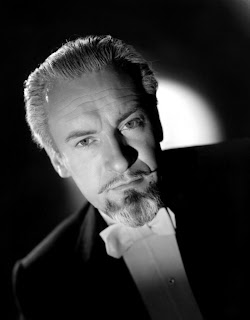 Dorian frequents the lowest taverns,  music halls and opium dens, and forms an attraction to a singer, Sybil Vane (a very young Angela Lansbury). He instists he will marry her, but the idea is frowned upon by all his friends, especially Henry, who suggests fills his head with an idea of testing her. When she ‘fails’ the test, Dorian breaks the engagement off. When Sybil is found dead several days later, Henry tells his friend while playing with an old Victorian 3D viewer ” we must have perspective” he tells him. Dorian is affected for all of a few minutes. When he comes to look at his painting, he notices the mouth is suddenly changed, apparently looking more cruel. 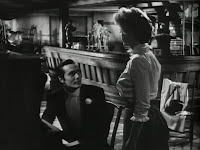 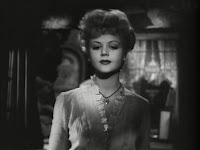 As his indiscretions and cruel intentions continue, so does the painting decay and become more corrupt. When Basil confronts Dorian, he shows him his work, now locked out of everyone’s way in his old school room in the attic, and he is horrified to see it, totally deformed. 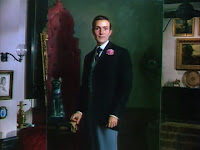 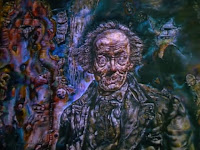 Considering it’s age, the film doesn’t shy away from using Wilde’s cracking dialogue, and Sander’s Sir Henry is perfectly rendered, and utterly convincing in his portrayal. Hatfield is cold and enigmatic, so therefore quite suitable for the Dorian character. It’s interesting to note, that Hatfield would later be reunited with Angela Lansbury in a few episodes of Murder She Wrote.
The film is beautifully filmed with lots of shadows and sinister camera angles and some ingenious colour inserts when we get close ups of the painting. At first, when it’s freshly done, to see it’s splendour and later, its corrupt and ugly side.
It’s interesting to watch especially since the recent remake is still fresh in mind. Although I may have been one of the only ones who actually thought the  2009 Dorian Gray was very good! But you really can’t beat this 1945 version, it’s a cracker!
10 out of 10