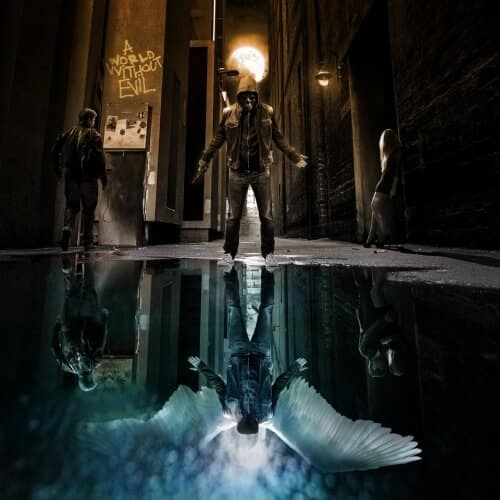 These days you have to go to Europe to find some good, fresh, melodic hard rock, so it’s a joy to find The King Lot hail from Scotland.

They have been around for a while, however, and A World Without Evil is the band’s second album, and the first with new guitarist Jay Moir. We’re just kicking ourselves that we didn’t discover the group sooner! The three-piece make a beautiful noise together. Combining killer riffs, stunning melody and great vocals, you’ll soon be nodding along with this album and ready to rock.

Album opener and title track A World Without Evil sets the band’s stall out straight away. It has a majestic Dio-esque quality (something that permeates throughout the record without ever once sounding derivative) and a powerful, bouncy, hook, which carries the heartfelt and optimistic lyrics that are so spot on for our modern times.

All I Want is a fabulous old-school feel-good anthem that some bands wouldn’t get away with keeping a straight face, but The King’s Lot prove that this style has nothing to be ashamed of.

This mission statement is continued throughout the album as we’re sonically treated to some incredibly memorable tunes and soaring solos. Often tracks like Damaged Goods and Lonely, could be likened to Steel Panther without the sexism and smut. Unlike that band, though, this is no pastiche, but is fantastic

Forget what the mainstream says, rock isn’t dead. There’s nothing wrong with enjoying catchy licks and melodic but hard rockin’ guitar licks; not everything has to be dour, screaming, full-throttle hate-filled ‘metal’ and there’s much more out there than so-called ‘RnB’ (which hasn’t got anything close to a rhythm and certainly ain’t blues) or ‘grime’. Do yourself a favour, open your eyes and ears and you could find something really special.