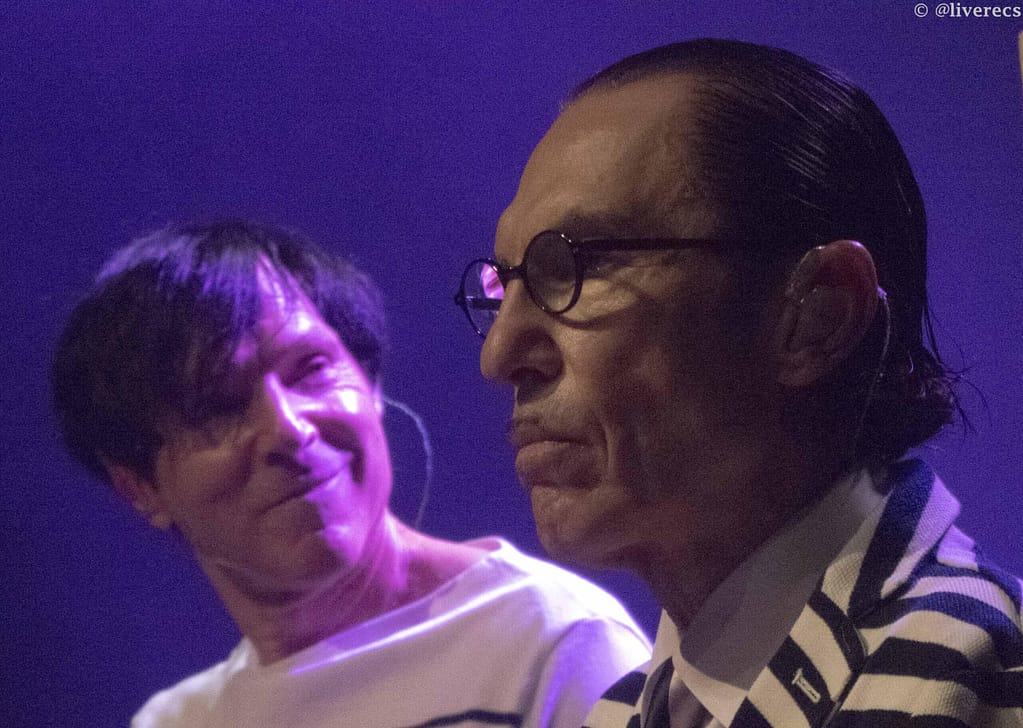 The Mael brothers are back on the road with a new album that proves them to be the most entertaining and enduring of the ‘art rock’ pack.

After the triumphant collaboration with Franz Ferdinand (FFS), it’s great to see Sparks back with their own band and with new material that is their strongest for a while. A fact proved by the amount of new songs aired during the show and the rapturous reaction awarded them.

The band – resplendent in their uniform striped jerseys – hit the stage with a confidence they have earned with What the Hell is it This Time? from the latest album Hippopotamus following it up in quick succession with the two-punch of Propaganda/At Home, At Work, At Play. Frontman Russell Mael bounces around the stage engaging the audience with his vocal dexterity and three-quarter length pants while brother and songwriter Ronald sits almost motionless behind his keyboard. Unless you’re at the right angle to actually see his fingers hitting the keys you’d swear he wasn’t playing – it’s that effortless to him. And what an amazing experience it is watching the synth master at work. Rebadged as ‘Ronald’ rather than Roland, his weapon of choice is the backbone of all the songs, whether it’s the emotive piano sound of Sherlock Holmes or the outright disco pomp of When Do I Get to Sing ‘My Way’?, it informs everything that’s happening on stage. Which is not to say the band (made up of two-thirds of Mini Mansions) don’t get the chance to rock out. Hello Young Lovers opener Dick Around, now a mainstay in the band’s set, allows for amps to be set to 11 and power chords aplenty. It’s a track that takes in several musical styles, much like the band themselves.

The classics were not ignored, though, with tracks played from almost all eras of the evergreen band. While one would expect the biggest cheer of the night to be reserved for the immortal This Town Ain’t Big Enough for Both of Us (and indeed, it does go down a storm), other back catalogue songs such as When Do I Get to Sing ‘My Way’? and My Baby’s Taking Me Home (which contains surely the most complex lyrics of the evening – not) had the whole of the art deco dancehall singing and the sprung floor gave an added buoyancy to the throng. That largest reaction came when the iconic Ron Mael stood up from his keyboard to dance to Number 1 Song in Heaven, something that has become a live tradition for the band.

Closing the show with Johnny Delusional, a track from the fabulous FFS project, and the brilliant Amateur Hour, the ninety-minute show was over all too quickly, leaving the sold-out audience wanting more.

Russell and Ron themselves were clearly aghast at the reception the album has received and, indeed, how everything has been going down on the tour. The humble and plainly genuine thanks they both gave at the end of the show was very touching and made everyone in the audience smile even more than they were already.

Originally published on Sounds Magazine (now defunct) website. Check out my STARBURST review of the documentary The Sparks Brothers here.